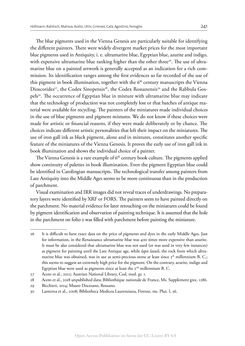 Hofmann, Rabitsch, Malissa, Aceto, Uhlir, Griesser, Calà, Agostino, Fenoglio 241 The blue pigments used in the Vienna Genesis are particularly suitable for identifying the different painters. There were widely divergent market prices for the most important blue pigments used in Antiquity, i. e. ultramarine blue, Egyptian blue, azurite and indigo, with expensive ultramarine blue ranking higher than the other three26. The use of ultra- marine blue on a painted artwork is generally accepted as an indication for a rich com- mission. Its identification ranges among the first evidences so far recorded of the use of this pigment in book illumination, together with the 6th century manuscripts the Vienna Dioscorides27, the Codex Sinopensis28, the Codex Rossanensis29 and the Rabbula Gos- pels30. The occurrence of Egyptian blue in mixture with ultramarine blue may indicate that the technology of production was not completely lost or that batches of antique ma- terial were available for recycling. The painters of the miniatures made individual choices in the use of blue pigments and pigment mixtures. We do not know if these choices were made for artistic or financial reasons, if they were made deliberately or by chance. The choices indicate different artistic personalities that left their impact on the miniatures. The use of iron gall ink as black pigment, alone and in mixtures, constitutes another specific feature of the miniatures of the Vienna Genesis. It proves the early use of iron gall ink in book illumination and shows the individual choice of a painter. The Vienna Genesis is a rare example of 6th century book culture. The pigments applied show continuity of palettes in book illumination. Even the pigment Egyptian blue could be identified in Carolingian manuscripts. The technological transfer among painters from Late Antiquity into the Middle Ages seems to be more continuous than in the production of parchment. Visual examination and IRR images did not reveal traces of underdrawings. No prepara- tory layers were identified by XRF or FORS. The painters seem to have painted directly on the parchment. No material evidence for later retouching on the miniatures could be found by pigment identification and observation of painting technique. It is assumed that the hole in the parchment on folio 2 was filled with parchment before painting the miniature. 26 It is difficult to have exact data on the price of pigments and dyes in the early Middle Ages. Just for information, in the Renaissance ultramarine blue was 400 times more expensive than azurite. It must be also considered that ultramarine blue was not used (or was used in very few instances) as pigment for painting until the Late Antique age, while lapis lazuli, the rock from which ultra- marine blue was obtained, was in use as semi-precious stone at least since 5th millennium B. C.; this seems to suggest an extremely high price for the pigment. On the contrary, azurite, indigo and Egyptian blue were used as pigments since at least the 2nd millennium B. C. 27 Aceto et al., 2012; Austrian National Library, Cod. med. gr. 1. 28 Aceto et al., 2018 unpublished data; Bibliothèque nationale de France, Ms. Supplement grec. 1286. 29 Bicchieri, 2014; Museo Docesano, Rossano. 30 Lanterna et al., 2008; Bibliotheca Medicea Laurenziana, Firenze, ms. Plut. I, 56. Open-Access-Publikation im Sinne der CC-Lizenz BY 4.0
zurück zum  Buch The Vienna Genesis - Material analysis and conservation of a Late Antique illuminated manuscript on purple parchment"
The Vienna Genesis Material analysis and conservation of a Late Antique illuminated manuscript on purple parchment