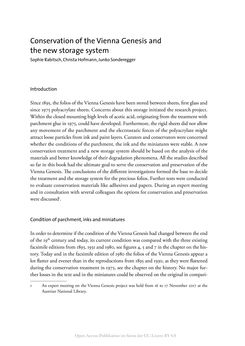 Conservation of the Vienna Genesis and the new storage system Sophie Rabitsch, Christa Hofmann, Junko Sonderegger Introduction Since 1895, the folios of the Vienna Genesis have been stored between sheets, first glass and since 1975 polyacrylate sheets. Concerns about this storage initiated the research project. Within the closed mounting high levels of acetic acid, originating from the treatment with parchment glue in 1975, could have developed. Furthermore, the rigid sheets did not allow any movement of the parchment and the electrostatic forces of the polyacrylate might attract loose particles from ink and paint layers. Curators and conservators were concerned whether the conditions of the parchment, the ink and the miniatures were stable. A new conservation treatment and a new storage system should be based on the analysis of the materials and better knowledge of their degradation phenomena. All the studies described so far in this book had the ultimate goal to serve the conservation and preservation of the Vienna Genesis. The conclusions of the different investigations formed the base to decide the treatment and the storage system for the precious folios. Further tests were conducted to evaluate conservation materials like adhesives and papers. During an expert meeting and in consultation with several colleagues the options for conservation and preservation were discussed1. Condition of parchment, inks and miniatures In order to determine if the condition of the Vienna Genesis had changed between the end of the 19th century and today, its current condition was compared with the three existing facsimile editions from 1895, 1931 and 1980, see figures 4, 5 and 7 in the chapter on the his- tory. Today and in the facsimile edition of 1980 the folios of the Vienna Genesis appear a lot flatter and evener than in the reproductions from 1895 and 1930, as they were flattened during the conservation treatment in 1975, see the chapter on the history. No major fur- ther losses in the text and in the miniatures could be observed on the original in compari- 1 An expert meeting on the Vienna Genesis project was held from 16 to 17 November 2017 at the Austrian National Library. Open-Access-Publikation im Sinne der CC-Lizenz BY 4.0
zurück zum  Buch The Vienna Genesis - Material analysis and conservation of a Late Antique illuminated manuscript on purple parchment"
The Vienna Genesis Material analysis and conservation of a Late Antique illuminated manuscript on purple parchment