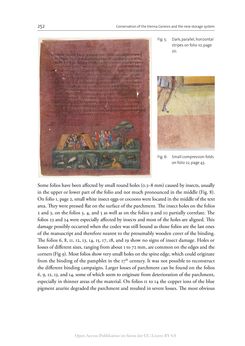 252 Conservation of the Vienna Genesis and the new storage system Some folios have been affected by small round holes (0.5–8 mm) caused by insects, usually in the upper or lower part of the folio and not much pronounced in the middle (Fig. 8). On folio 1, page 2, small white insect eggs or cocoons were located in the middle of the text area. They were pressed flat on the surface of the parchment. The insect holes on the folios 2 and 3, on the folios 3, 4, and 5 as well as on the folios 9 and 10 partially correlate. The folios 23 and 24 were especially affected by insects and most of the holes are aligned. This damage possibly occurred when the codex was still bound as those folios are the last ones of the manuscript and therefore nearest to the presumably wooden cover of the binding. The folios 6, 8, 11, 12, 13, 14, 15, 17, 18, and 19 show no signs of insect damage. Holes or losses of different sizes, ranging from about 1 to 72 mm, are common on the edges and the corners (Fig 9). Most folios show very small holes on the spine edge, which could originate from the binding of the pamphlet in the 17th century. It was not possible to reconstruct the different binding campaigns. Larger losses of parchment can be found on the folios 6, 9, 12, 13, and 14, some of which seem to originate from deterioration of the parchment, especially in thinner areas of the material. On folios 11 to 14 the copper ions of the blue pigment azurite degraded the parchment and resulted in severe losses. The most obvious Fig. 5: Dark, parallel, horizontal stripes on folio 10, page 20. Fig. 6: Small compression folds on folio 22, page 43. Open-Access-Publikation im Sinne der CC-Lizenz BY 4.0
zurück zum  Buch The Vienna Genesis - Material analysis and conservation of a Late Antique illuminated manuscript on purple parchment"
The Vienna Genesis Material analysis and conservation of a Late Antique illuminated manuscript on purple parchment