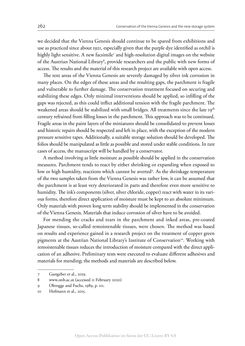 262 Conservation of the Vienna Genesis and the new storage system we decided that the Vienna Genesis should continue to be spared from exhibitions and use as practiced since about 1921, especially given that the purple dye identified as orchil is highly light sensitive. A new facsimile7 and high-resolution digital images on the website of the Austrian National Library8, provide researchers and the public with new forms of access. The results and the material of this research project are available with open access. The text areas of the Vienna Genesis are severely damaged by silver ink corrosion in many places. On the edges of these areas and the resulting gaps, the parchment is fragile and vulnerable to further damage. The conservation treatment focused on securing and stabilizing these edges. Only minimal interventions should be applied, so infilling of the gaps was rejected, as this could inflict additional tension with the fragile parchment. The weakened areas should be stabilized with small bridges. All treatments since the late 19th century refrained from filling losses in the parchment. This approach was to be continued. Fragile areas in the paint layers of the miniatures should be consolidated to prevent losses and historic repairs should be respected and left in place, with the exception of the modern pressure sensitive tapes. Additionally, a suitable storage solution should be developed. The folios should be manipulated as little as possible and stored under stable conditions. In rare cases of access, the manuscript will be handled by a conservator. A method involving as little moisture as possible should be applied in the conservation measures. Parchment tends to react by either shrinking or expanding when exposed to low or high humidity, reactions which cannot be averted9. As the shrinkage temperature of the two samples taken from the Vienna Genesis was rather low, it can be assumed that the parchment is at least very deteriorated in parts and therefore even more sensitive to humidity. The ink’s components (silver, silver chloride, copper) react with water in its vari- ous forms, therefore direct application of moisture must be kept to an absolute minimum. Only materials with proven long term stability should be implemented in the conservation of the Vienna Genesis. Materials that induce corrosion of silver have to be avoided. For mending the cracks and tears in the parchment and inked areas, pre-coated Japanese tissues, so-called remoistenable tissues, were chosen. The method was based on results and experience gained in a research project on the treatment of copper green pigments at the Austrian National Library’s Institute of Conservation10. Working with remoistenable tissues reduces the introduction of moisture compared with the direct appli- cation of an adhesive. Preliminary tests were executed to evaluate different adhesives and materials for mending; the methods and materials are described below. 7 Gastgeber et al., 2019. 8 www.onb.ac.at (accessed 11 February 2020) 9 Oltrogge and Fuchs, 1989, p. 111. 10 Hofmann et al., 2015. Open-Access-Publikation im Sinne der CC-Lizenz BY 4.0
zurück zum  Buch The Vienna Genesis - Material analysis and conservation of a Late Antique illuminated manuscript on purple parchment"
The Vienna Genesis Material analysis and conservation of a Late Antique illuminated manuscript on purple parchment