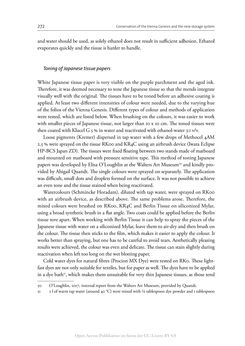 272 Conservation of the Vienna Genesis and the new storage system and water should be used, as solely ethanol does not result in sufficient adhesion. Ethanol evaporates quickly and the tissue is harder to handle. Toning of Japanese tissue papers White Japanese tissue paper is very visible on the purple parchment and the aged ink. Therefore, it was deemed necessary to tone the Japanese tissue so that the mends integrate visually well with the original. The tissues have to be toned before an adhesive coating is applied. At least two different intensities of colour were needed, due to the varying hue of the folios of the Vienna Genesis. Different types of colour and methods of application were tested, which are listed below. When brushing on the colours, it was easier to work with smaller pieces of Japanese tissue, not larger than 10 x 10 cm. The toned tissues were then coated with Klucel G 5 % in water and reactivated with ethanol-water 3:1 v/v. Loose pigments (Kremer) dispersed in tap water with a few drops of Methocel 4AM 2.5 % were sprayed on the tissue RK00 and KR4C using an airbrush device (Iwata Eclipse HP-BCS Japan ZD). The tissues were fixed floating between two stands made of matboard and mounted on matboard with pressure sensitive tape. This method of toning Japanese papers was developed by Elisa O’Loughlin at the Walters Art Museum50 and kindly pro- vided by Abigail Quandt. The single colours were sprayed on separately. The application was difficult, small dots and droplets formed on the surface. It was not possible to achieve an even tone and the tissue stained when being reactivated. Watercolours (Schmincke Horadam), diluted with tap water, were sprayed on RK00 with an airbrush device, as described above. The same problems arose. Therefore, the mixed colours were brushed on RK00, KR4C and Berlin Tissue on siliconized Mylar, using a broad synthetic brush in a flat angle. Two coats could be applied before the Berlin tissue tore apart. When working with Berlin Tissue it can help to spray the pieces of the Japanese tissue with water on a siliconized Mylar, leave them to air-dry and then brush on the colour. The tissue then sticks to the film, which makes it easier to apply the colour. It works better than spraying, but one has to be careful to avoid tears. Aesthetically pleasing results were achieved, the colour was even and delicate. The tissue can stain slightly during reactivation when left too long on the wet blotting paper. Cold water dyes for natural fibres (Procion MX Dye) were tested on RK0. These light- fast dyes are not only suitable for textiles, but for paper as well. The dyes have to be applied in a dye bath51, which makes them unsuitable for very thin Japanese tissues, as those tend 50 O’Loughlin, 2017, internal report from the Walters Art Museum, provided by Quandt. 51 2 l of warm tap water (around 40 °C) were mixed with ¼ tablespoon dye powder and 1 tablespoon Open-Access-Publikation im Sinne der CC-Lizenz BY 4.0
zurück zum  Buch The Vienna Genesis - Material analysis and conservation of a Late Antique illuminated manuscript on purple parchment"
The Vienna Genesis Material analysis and conservation of a Late Antique illuminated manuscript on purple parchment