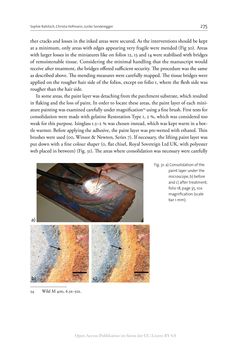 Sophie Rabitsch, Christa Hofmann, Junko Sonderegger 275 ther cracks and losses in the inked areas were secured. As the interventions should be kept at a minimum, only areas with edges appearing very fragile were mended (Fig 30). Areas with larger losses in the miniatures like on folios 12, 13 and 14 were stabilised with bridges of remoistenable tissue. Considering the minimal handling that the manuscript would receive after treatment, the bridges offered sufficient security. The procedure was the same as described above. The mending measures were carefully mapped. The tissue bridges were applied on the rougher hair side of the folios, except on folio 1, where the flesh side was rougher than the hair side. In some areas, the paint layer was detaching from the parchment substrate, which resulted in flaking and the loss of paint. In order to locate these areas, the paint layer of each mini- ature painting was examined carefully under magnification54 using a fine brush. First tests for consolidation were made with gelatine Restoration Type 1, 2 %, which was considered too weak for this purpose. Isinglass 1.5–2 % was chosen instead, which was kept warm in a bot- tle warmer. Before applying the adhesive, the paint layer was pre-wetted with ethanol. Thin brushes were used (00, Winsor & Newton, Series 7). If necessary, the lifting paint layer was put down with a fine colour shaper (0, flat chisel, Royal Sovereign Ltd UK, with polyester web placed in between) (Fig. 31). The areas where consolidation was necessary were carefully 54 Wild M 400, 6.3x–32x. Fig. 31: a) Consolidation of the paint layer under the microscope, b) before and c) after treatment, folio 18, page 35, 10x magnification (scale bar 1 mm). Open-Access-Publikation im Sinne der CC-Lizenz BY 4.0
zurück zum  Buch The Vienna Genesis - Material analysis and conservation of a Late Antique illuminated manuscript on purple parchment"
The Vienna Genesis Material analysis and conservation of a Late Antique illuminated manuscript on purple parchment