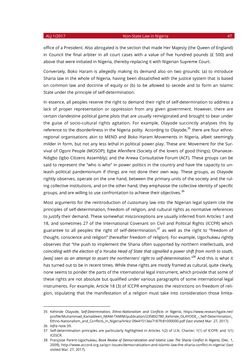 ALJ 1/2017 Non-State Law in Nigeria 47 office of a President. Also abrogated is the section that made Her Majesty (the Queen of England) in Council the final arbiter in all court cases with a value of five hundred pounds (£ 500) and above that were initiated in Nigeria, thereby replacing it with Nigerian Supreme Court. Conversely, Boko Haram is allegedly making its demand also on two grounds: (a) to introduce Sharia law in the whole of Nigeria, having been dissatisfied with the justice system that is based on common law and doctrine of equity or (b) to be allowed to secede and to form an Islamic State under the principle of self-determination. In essence, all peoples reserve the right to demand their right of self-determination to address a lack of proper representation or oppression from any given government. However, there are certain clandestine political game plots that are usually reinvigorated and brought to bear under the guise of socio-cultural rights agitation. For example, Olayode succinctly analyses this by reference to the disorderliness in the Nigeria polity. According to Olayode,35 there are four ethno- regional organisations akin to MEND and Boko Haram Movements in Nigeria, albeit seemingly milder in form, but not any less lethal in political power play. These are: Movement for the Sur- vival of Ogoni People (MOSOP); Egbe Afenifere (Society of the lovers of good things); Ohanaeze- Ndigbo (Igbo Citizens Assembly); and the Arewa Consultative Forum (ACF). These groups can be said to represent the “who is who” in power politics in the country and have the capacity to un- leash political pandemonium if things are not done their own way. These groups, as Olayode rightly observes, operate on the one hand, between the primary units of the society and the rul- ing collective institutions, and on the other hand, they emphasise the collective identity of specific groups, and are willing to use confrontation to achieve their objectives.36 Most arguments for the reintroduction of customary law into the Nigerian legal system cite the principles of self-determination, freedom of religion, and cultural rights as normative references to justify their demand. These somewhat misconceptions are usually inferred from Articles 1 and 18, and sometimes 27 of the International Covenant on Civil and Political Rights (ICCPR) which guarantee to all peoples the right of self-determination,37 as well as the right to “freedom of thought, conscience and religion” (hereafter freedom of religion). For example, Ugochukwu rightly observes that “the push to implement the Sharia often supported by northern intellectuals, and coinciding with the election of a Yoruba Head of State that signalled a power shift from north to south, [was] seen as an attempt to assert the northerners’ right to self-determination.”38 And this is what it has turned out to be in recent times. While these rights are mostly framed as cultural, quite clearly, none seems to ponder the parts of the international legal instrument, which provide that some of these rights are not absolute but qualified under various paragraphs of some international legal instruments. For example, Article 18 (3) of ICCPR emphasizes the restrictions on freedom of reli- gion, stipulating that the manifestation of a religion must take into consideration those limita- 35 Kehinde Olayode, Self-Determination, Ethno-Nationalism and Conflicts in Nigeria, https://www.researchgate.net/ profile/Muhammad_Kamaldeen_IMAM-TAMIM/publication/235892780_Kehinde_OLAYODE_-_Self-Determination_ Ethno-Nationalism_and_Conflicts_in_Nigeria/links/ 09e41513ea7187fc81000000.pdf (last visited Mar. 27, 2017). 36 Infra note 39. 37 Self-determination principles are particularly highlighted in Articles 1(2) of U.N. Charter; 1(1) of ICCPR; and 1(1) ICESCR. 38 Françoise Parent-Ugochukwu, Book Review of Democratization and Islamic Law: The Sharia Conflict in Nigeria, (Dec. 1, 2009), http://www.accord.org.za/ajcr-issues/democratization-and-islamic-law-the-sharia-conflict-in-nigeria/ (last visited Mar. 27, 2017).
zurück zum  Buch Austrian Law Journal, Band 1/2017"
Austrian Law Journal Band 1/2017