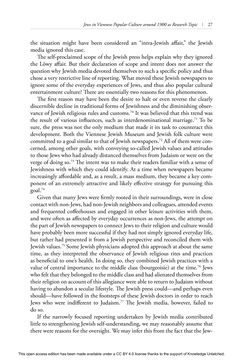 Jews in Viennese Popular Culture around 1900 as Research Topic | 27 the situation might have been considered an “intra-Jewish aﬀ air,” the Jewish media ignored this case. Th e self-proclaimed scope of the Jewish press helps explain why they ignored the Löwy aﬀ air. But their declaration of scope and intent does not answer the question why Jewish media devoted themselves to such a speciﬁ c policy and thus chose a very restrictive line of reporting. What moved these Jewish newspapers to ignore some of the everyday experiences of Jews, and thus also popular cultural entertainment culture? Th ere are essentially two reasons for this phenomenon. Th e ﬁ rst reason may have been the desire to halt or even reverse the clearly discernible decline in traditional forms of Jewishness and the diminishing obser- vance of Jewish religious rules and customs.70 It was believed that this trend was the result of various inﬂ uences, such as interdenominational marriage.71 To be sure, the press was not the only medium that made it its task to counteract this development. Both the Viennese Jewish Museum and Jewish folk culture were committed to a goal similar to that of Jewish newspapers.72 All of them were con- cerned, among other goals, with conveying so-called Jewish values and attitudes to those Jews who had already distanced themselves from Judaism or were on the verge of doing so.73 Th e intent was to make their readers familiar with a sense of Jewishness with which they could identify. At a time when newspapers became increasingly aﬀ ordable and, as a result, a mass medium, they became a key com- ponent of an extremely attractive and likely eﬀ ective strategy for pursuing this goal.74 Given that many Jews were ﬁ rmly rooted in their surroundings, were in close contact with non-Jews, had non-Jewish neighbors and colleagues, attended events and frequented coﬀ eehouses and engaged in other leisure activities with them, and were often as aﬀ ected by everyday occurrences as non-Jews, the attempt on the part of Jewish newspapers to connect Jews to their religion and culture would have probably been more successful if they had not simply ignored everyday life, but rather had presented it from a Jewish perspective and reconciled them with Jewish values.75 Some Jewish physicians adopted this approach at about the same time, as they interpreted the observance of Jewish religious rites and practices as beneﬁ cial to one’s health. In doing so, they combined Jewish practices with a value of central importance to the middle class (bourgeoisie) at the time.76 Jews who felt that they belonged to the middle class and had alienated themselves from their religion on account of this allegiance were able to return to Judaism without having to abandon a secular lifestyle. Th e Jewish press could—and perhaps even should—have followed in the footsteps of these Jewish doctors in order to reach Jews who were indiﬀ erent to Judaism.77 Th e Jewish media, however, failed to do so. If the narrowly focused reporting undertaken by Jewish media contributed little to strengthening Jewish self-understanding, we may reasonably assume that there were reasons for the oversight. We may infer this from the fact that the Jew- This open access edition has been made available under a CC BY 4.0 license thanks to the support of Knowledge Unlatched.
back to the  book Entangled Entertainers - Jews and Popular Culture in Fin-de-Siècle Vienna"
Entangled Entertainers Jews and Popular Culture in Fin-de-Siècle Vienna