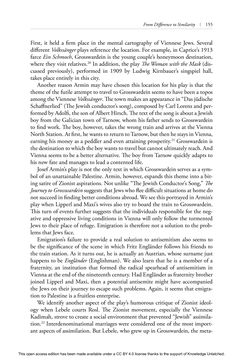 From Diﬀ erence to Similarity | 155 First, it held a ﬁ rm place in the mental cartography of Viennese Jews. Several diﬀ erent Volkssänger plays reference the location. For example, in Caprice’s 1913 farce Ein Schmoch, Grosswardein is the young couple’s honeymoon destination, where they visit relatives.20 In addition, the play Th e Woman with the Mask (dis- cussed previously), performed in 1909 by Ludwig Kirnbauer ’s singspiel hall, takes place entirely in this city. Another reason Armin may have chosen this location for his play is that the theme of the futile attempt to travel to Grosswardein seems to have been a topos among the Viennese Volkssänger. Th e town makes an appearance in “Das jüdische Schaﬀ nerlied” (Th e Jewish conductor’s song), composed by Carl Lorens and per- formed by Adolﬁ , the son of Albert Hirsch. Th e text of the song is about a Jewish boy from the Galician town of Tarnow, whom his father sends to Grosswardein to ﬁ nd work. Th e boy, however, takes the wrong train and arrives at the Vienna North Station. At ﬁ rst, he wants to return to Tarnow, but then he stays in Vienna, earning his money as a peddler and even attaining prosperity.21 Grosswardein is the destination to which the boy wants to travel but cannot ultimately reach. And Vienna seems to be a better alternative. Th e boy from Tarnow quickly adapts to his new fate and manages to lead a contented life. Josef Armin’s play is not the only text in which Grosswardein serves as a sym- bol of an unattainable Palestine. Armin, however, expands this theme into a bit- ing satire of Zionist aspirations. Not unlike “Th e Jewish Conductor’s Song,” Th e Journey to Grosswardein suggests that Jews who ﬂ ee diﬃ cult situations at home do not succeed in ﬁ nding better conditions abroad. We see this portrayed in Armin’s play when Lipperl and Maxi’s wives also try to board the train to Grosswardein. Th is turn of events further suggests that the individuals responsible for the neg- ative and oppressive living conditions in Vienna will only follow the tormented Jews to their place of refuge. Emigration is therefore not a solution to the prob- lems that Jews face. Emigration’s failure to provide a real solution to antisemitism also seems to be the signiﬁ cance of the scene in which Fritz Engländer follows his friends to the train station. As it turns out, he is actually an Austrian, whose surname just happens to be Engländer (Englishman). We also learn that he is a member of a fraternity, an institution that formed the radical spearhead of antisemitism in Vienna at the end of the nineteenth century. Had Engländer as fraternity brother joined Lipperl and Maxi, then a potential antisemite might have accompanied the Jews on their journey to escape such problems. Again, it seems that emigra- tion to Palestine is a fruitless enterprise. We identify another aspect of the play’s humorous critique of Zionist ideol- ogy when Lebele courts Rosl. Th e Zionist movement, especially the Viennese Kadimah, strove to create a social environment that prevented “Jewish” assimila- tion.22 Interdenominational marriages were considered one of the most import- ant aspects of assimilation. But Lebele, who grew up in Grosswardein, the meta- This open access edition has been made available under a CC BY 4.0 license thanks to the support of Knowledge Unlatched.
back to the  book Entangled Entertainers - Jews and Popular Culture in Fin-de-Siècle Vienna"
Entangled Entertainers Jews and Popular Culture in Fin-de-Siècle Vienna