Page - 36 - in The Forest Farm - Tales of the Austrian Tyrol 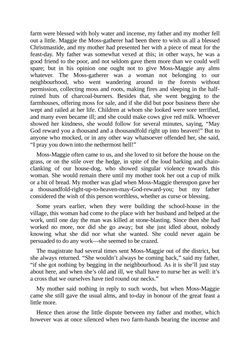 farm were blessed with holy water and incense, my father and my mother fell out a little. Maggie the Moss-gatherer had been there to wish us all a blessed Christmastide, and my mother had presented her with a piece of meat for the feast-day. My father was somewhat vexed at this; in other ways, he was a good friend to the poor, and not seldom gave them more than we could well spare; but in his opinion one ought not to give Moss-Maggie any alms whatever. The Moss-gatherer was a woman not belonging to our neighbourhood, who went wandering around in the forests without permission, collecting moss and roots, making fires and sleeping in the half- ruined huts of charcoal-burners. Besides that, she went begging to the farmhouses, offering moss for sale, and if she did but poor business there she wept and railed at her life. Children at whom she looked were sore terrified, and many even became ill; and she could make cows give red milk. Whoever showed her kindness, she would follow for several minutes, saying, “May God reward you a thousand and a thousandfold right up into heaven!” But to anyone who mocked, or in any other way whatsoever offended her, she said, “I pray you down into the nethermost hell!” Moss-Maggie often came to us, and she loved to sit before the house on the grass, or on the stile over the hedge, in spite of the loud barking and chain- clanking of our house-dog, who showed singular violence towards this woman. She would remain there until my mother took her out a cup of milk or a bit of bread. My mother was glad when Moss-Maggie thereupon gave her a thousandfold-right-up-to-heaven-may-God-reward-you; but my father considered the wish of this person worthless, whether as curse or blessing. Some years earlier, when they were building the school-house in the village, this woman had come to the place with her husband and helped at the work, until one day the man was killed at stone-blasting. Since then she had worked no more, nor did she go away; but she just idled about, nobody knowing what she did nor what she wanted. She could never again be persuaded to do any work—she seemed to be crazed. The magistrate had several times sent Moss-Maggie out of the district, but she always returned. “She wouldn’t always be coming back,” said my father, “if she got nothing by begging in the neighbourhood. As it is she’ll just stay about here, and when she’s old and ill, we shall have to nurse her as well: it’s a cross that we ourselves have tied round our necks.” My mother said nothing in reply to such words, but when Moss-Maggie came she still gave the usual alms, and to-day in honour of the great feast a little more. Hence then arose the little dispute between my father and mother, which however was at once silenced when two farm-hands bearing the incense and
back to the  book The Forest Farm - Tales of the Austrian Tyrol"
The Forest Farm Tales of the Austrian Tyrol