Page - 55 - in The Forest Farm - Tales of the Austrian Tyrol 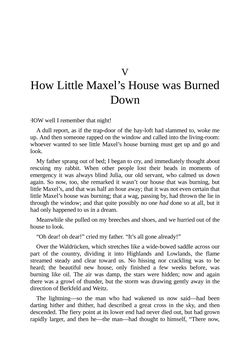 V How Little Maxel’s House was Burned Down HOW well I remember that night! A dull report, as if the trap-door of the hay-loft had slammed to, woke me up. And then someone rapped on the window and called into the living-room: whoever wanted to see little Maxel’s house burning must get up and go and look. My father sprang out of bed; I began to cry, and immediately thought about rescuing my rabbit. When other people lost their heads in moments of emergency it was always blind Julia, our old servant, who calmed us down again. So now, too, she remarked it wasn’t our house that was burning, but little Maxel’s, and that was half an hour away; that it was not even certain that little Maxel’s house was burning; that a wag, passing by, had thrown the lie in through the window; and that quite possibly no one had done so at all, but it had only happened to us in a dream. Meanwhile she pulled on my breeches and shoes, and we hurried out of the house to look. “Oh dear! oh dear!” cried my father. “It’s all gone already!” Over the Waldrücken, which stretches like a wide-bowed saddle across our part of the country, dividing it into Highlands and Lowlands, the flame streamed steady and clear toward us. No hissing nor crackling was to be heard; the beautiful new house, only finished a few weeks before, was burning like oil. The air was damp, the stars were hidden; now and again there was a growl of thunder, but the storm was drawing gently away in the direction of Berkfeld and Weitz. The lightning—so the man who had wakened us now said—had been darting hither and thither, had described a great cross in the sky, and then descended. The fiery point at its lower end had never died out, but had grown rapidly larger, and then he—the man—had thought to himself, “There now,
back to the  book The Forest Farm - Tales of the Austrian Tyrol"
The Forest Farm Tales of the Austrian Tyrol