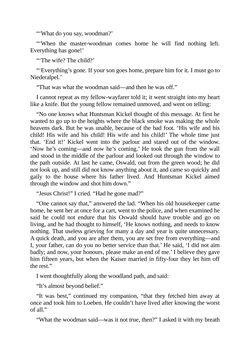 “‘What do you say, woodman?’ “‘When the master-woodman comes home he will find nothing left. Everything has gone!’ “‘The wife? The child?’ “‘Everything’s gone. If your son goes home, prepare him for it. I must go to Niederalpel.’ “That was what the woodman said—and then he was off.” I cannot repeat as my fellow-wayfarer told it; it went straight into my heart like a knife. But the young fellow remained unmoved, and went on telling: “No one knows what Huntsman Kickel thought of this message. At first he wanted to go up to the heights where the black smoke was making the whole heavens dark. But he was unable, because of the bad foot. ‘His wife and his child! His wife and his child! His wife and his child!’ The whole time just that. ‘End it!’ Kickel went into the parlour and stared out of the window. ‘Now he’s coming—and now he’s coming.’ He took the gun from the wall and stood in the middle of the parlour and looked out through the window to the path outside. At last he came, Oswald, out from the green wood; he did not look up, and still did not know anything about it, and came so quickly and gaily to the house where his father lived. And Huntsman Kickel aimed through the window and shot him down.” “Jesus Christ!” I cried. “Had he gone mad?” “One cannot say that,” answered the lad. “When his old housekeeper came home, he sent her at once for a cart, went to the police, and when examined he said he could not endure that his Oswald should have trouble and go on living, and he had thought to himself, ‘He knows nothing, and needs to know nothing. That useless grieving for many a day and year is quite unnecessary. A quick death, and you are after them, you are set free from everything—and I, your father, can do you no better service than that.’ He said, ‘I did not aim badly; and now, your honours, please make an end of me.’ I believe they gave him fifteen years, but when the Kaiser married in fifty-four they let him off the rest.” I went thoughtfully along the woodland path, and said: “It’s almost beyond belief.” “It was best,” continued my companion, “that they fetched him away at once and took him to Loeben. He couldn’t have lived after knowing the worst of all.” “What the woodman said—was it not true, then?” I asked it with my breath
back to the  book The Forest Farm - Tales of the Austrian Tyrol"
The Forest Farm Tales of the Austrian Tyrol