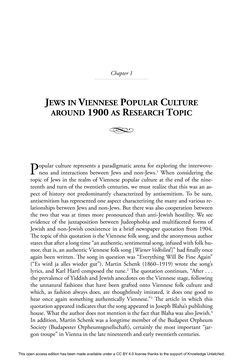 Chapter 1 JEWS IN VIENNESE POPULAR CULTURE AROUND 1900 AS RESEARCH TOPIC d Popular culture represents a paradigmatic arena for exploring the interwove-ness and interactions between Jews and non-Jews.1 When considering the topic of Jews in the realm of Viennese popular culture at the end of the nine- teenth and turn of the twentieth centuries, we must realize that this was an as- pect of history not predominantly characterized by antisemitism. To be sure, antisemitism has represented one aspect characterizing the many and various re- lationships between Jews and non-Jews. But there was also cooperation between the two that was at times more pronounced than anti-Jewish hostility. We see evidence of the juxtaposition between Judeophobia and multifaceted forms of Jewish and non-Jewish coexistence in a brief newspaper quotation from 1904. Th e topic of this quotation is the Viennese folk song, and the anonymous author states that after a long time “an authentic, sentimental song, infused with folk hu- mor, that is, an authentic Viennese folk song [Wiener Volkslied]” had ﬁ nally once again been written. Th e song in question was “Everything Will Be Fine Again” (“Es wird ja alles wieder gut”). Martin Schenk (1860–1919) wrote the song’s lyrics, and Karl Hartl composed the tune.2 Th e quotation continues, “After . . . the prevalence of Yiddish and Jewish anecdotes on the Viennese stage, following the unnatural fashions that have been grafted onto Viennese folk culture and which, as fashion always does, are thoughtlessly imitated, it does one good to hear once again something authentically Viennese.”3 Th e article in which this quotation appeared indicates that the song appeared in Joseph Blaha’s publishing house. What the author does not mention is the fact that Blaha was also Jewish.4 In addition, Martin Schenk was a longtime member of the Budapest Orpheum Society ( Budapester Orpheumsgesellschaft), certainly the most important “jar- gon troupe” in Vienna in the late nineteenth and early twentieth centuries. This open access edition has been made available under a CC BY 4.0 license thanks to the support of Knowledge Unlatched.
zurück zum  Buch Entangled Entertainers - Jews and Popular Culture in Fin-de-Siècle Vienna"
Entangled Entertainers Jews and Popular Culture in Fin-de-Siècle Vienna