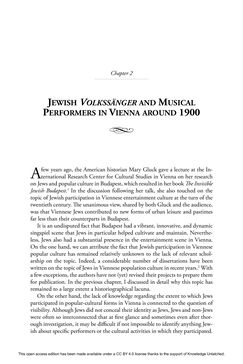 Chapter 2 JEWISH VOLKSSÄNGER AND MUSICAL PERFORMERS IN VIENNA AROUND 1900 d A few years ago, the American historian Mary Gluck gave a lecture at the In-ternational Research Center for Cultural Studies in Vienna on her research on Jews and popular culture in Budapest, which resulted in her book Th e Invisible Jewish Budapest.1 In the discussion following her talk, she also touched on the topic of Jewish participation in Viennese entertainment culture at the turn of the twentieth century. Th e unanimous view, shared by both Gluck and the audience, was that Viennese Jews contributed to new forms of urban leisure and pastimes far less than their counterparts in Budapest. It is an undisputed fact that Budapest had a vibrant, innovative, and dynamic singspiel scene that Jews in particular helped cultivate and maintain. Neverthe- less, Jews also had a substantial presence in the entertainment scene in Vienna. On the one hand, we can attribute the fact that Jewish participation in Viennese popular culture has remained relatively unknown to the lack of relevant schol- arship on the topic. Indeed, a considerable number of dissertations have been written on the topic of Jews in Viennese population culture in recent years.2 With a few exceptions, the authors have not (yet) revised their projects to prepare them for publication. In the previous chapter, I discussed in detail why this topic has remained to a large extent a historiographical lacuna. On the other hand, the lack of knowledge regarding the extent to which Jews participated in popular-cultural forms in Vienna is connected to the question of visibility. Although Jews did not conceal their identity as Jews, Jews and non-Jews were often so interconnected that at ﬁ rst glance and sometimes even after thor- ough investigation, it may be diﬃ cult if not impossible to identify anything Jew- ish about speciﬁ c performers or the cultural activities in which they participated. This open access edition has been made available under a CC BY 4.0 license thanks to the support of Knowledge Unlatched.
zurück zum  Buch Entangled Entertainers - Jews and Popular Culture in Fin-de-Siècle Vienna"
Entangled Entertainers Jews and Popular Culture in Fin-de-Siècle Vienna