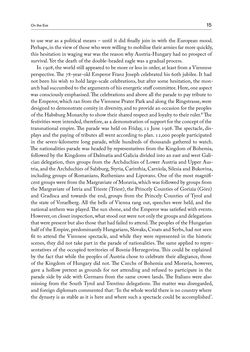 On the Eve 15 to use war as a political means  – until it did finally join in with the European mood. Perhaps, in the view of those who were willing to mobilise their armies far more quickly, this hesitation in waging war was the reason why Austria-Hungary had no prospect of survival. Yet the death of the double-headed eagle was a gradual process. In 1908, the world still appeared to be more or less in order, at least from a Viennese perspective. The 78-year-old Emperor Franz Joseph celebrated his 60th jubilee. It had not been his wish to hold large-scale celebrations, but after some hesitation, the mon- arch had succumbed to the arguments of his energetic staff committee. Here, one aspect was consciously emphasised. The celebrations and above all the parade to pay tribute to the Emperor, which ran from the Viennese Prater Park and along the Ringstrasse, were designed to demonstrate comity in diversity, and to provide an occasion for the peoples of the Habsburg Monarchy to show their shared respect and loyalty to their ruler.8 The festivities were intended, therefore, as a demonstration of support for the concept of the transnational empire. The parade was held on Friday, 12 June 1908. The spectacle, dis- plays and the paying of tributes all went according to plan. 12,000 people participated in the seven-kilometre long parade, while hundreds of thousands gathered to watch. The nationalities parade was headed by representatives from the Kingdom of Bohemia, followed by the Kingdoms of Dalmatia and Galicia divided into an east and west Gali- cian delegation, then groups from the Archduchies of Lower Austria and Upper Aus- tria, and the Archduchies of Salzburg, Styria, Carinthia, Carniola, Silesia and Bukovina, including groups of Romanians, Ruthenians and Lipovans. One of the most magnifi- cent groups were from the Margraviate of Moravia, which was followed by groups from the Margraviate of Istria and Trieste (Triest), the Princely Counties of Gorizia (Görz) and Gradisca and towards the end, groups from the Princely Counties of Tyrol and the state of Vorarlberg. All the bells of Vienna rang out, speeches were held, and the national anthem was played. The sun shone, and the Emperor was satisfied with events. However, on closer inspection, what stood out were not only the groups and delegations that were present but also those that had failed to attend. The peoples of the Hungarian half of the Empire, predominantly Hungarians, Slovaks, Croats and Serbs, had not seen fit to attend the Viennese spectacle, and while they were represented in the historic scenes, they did not take part in the parade of nationalities. The same applied to repre- sentatives of the occupied territories of Bosnia-Herzegovina. This could be explained by the fact that while the peoples of Austria chose to celebrate their allegiance, those of the Kingdom of Hungary did not. The Czechs of Bohemia and Moravia, however, gave a hollow pretext as grounds for not attending and refused to participate in the parade side by side with Germans from the same crown lands. The Italians were also missing from the South Tyrol and Trentino delegations. The matter was disregarded, and foreign diplomats commented that : ‘In the whole world there is no country where the dynasty is as stable as it is here and where such a spectacle could be accomplished’.
zurück zum  Buch THE FIRST WORLD WAR - and the End of the Habsburg Monarchy, 1914 – 1918"
THE FIRST WORLD WAR and the End of the Habsburg Monarchy, 1914 – 1918
Entnommen aus der FWF-E-Book-Library