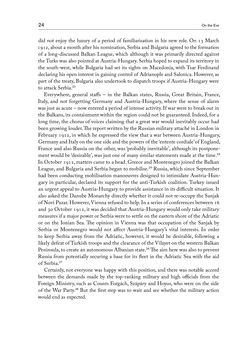 24 On the Eve did not enjoy the luxury of a period of familiarisation in his new role. On 13 March 1912, about a month after his nomination, Serbia and Bulgaria agreed to the formation of a long-discussed Balkan League, which although it was primarily directed against the Turks was also pointed at Austria-Hungary. Serbia hoped to expand its territory in the south-west, while Bulgaria had set its sights on Macedonia, with Tsar Ferdinand declaring his open interest in gaining control of Adrianople and Salonica. However, as part of the treaty, Bulgaria also undertook to dispatch troops if Austria-Hungary were to attack Serbia.23 Everywhere, general staffs  – in the Balkan states, Russia, Great Britain, France, Italy, and not forgetting Germany and Austria-Hungary, where the sense of alarm was just as acute  – now entered a period of intense activity. If war were to break out in the Balkans, its containment within the region could not be guaranteed. Indeed, for a long time, the chorus of voices claiming that a great war would inevitably occur had been growing louder. The report written by the Russian military attaché in London in February 1912, in which he expressed the view that a war between Austria-Hungary, Germany and Italy on the one side and the powers of the ‘entente cordiale’ of England, France and also Russia on the other, was ‘probably inevitable’, although its postpone- ment would be ‘desirable’, was just one of many similar statements made at the time.24 In October 1912, matters came to a head. Greece and Montenegro joined the Balkan League, and Bulgaria and Serbia began to mobilise.25 Russia, which since September had been conducting mobilisation manoeuvres designed to intimidate Austria-Hun- gary in particular, declared its support for the anti-Turkish coalition. Turkey issued an urgent appeal to Austria-Hungary to provide assistance in its difficult situation. It also asked the Danube Monarchy directly whether it could not re-occupy the Sanjak of Novi Pazar. However, Vienna refused to help. In a series of conferences between 16 and 30 October 1912, it was decided that Austria-Hungary would only take military measures if a major power or Serbia were to settle on the eastern shore of the Adriatic or on the Ionian Sea. The opinion in Vienna was that occupation of the Sanjak by Serbia or Montenegro would not affect Austria-Hungary’s vital interests. In order to keep Serbia away from the Adriatic, however, it would be desirable, following a likely defeat of Turkish troops and the clearance of the Vilayet on the western Balkan Peninsula, to create an autonomous Albanian state.26 The aim here was also to prevent Russia from potentially securing a base for its fleet in the Adriatic Sea with the aid of Serbia.27 Certainly, not everyone was happy with this position, and there was notable accord between the demands made by the top-ranking military and high officials from the Foreign Ministry, such as Counts Forgách, Szápáry and Hoyos, who were on the side of the War Party.28 But the first step was to wait and see whether the military action would end as expected.
zurück zum  Buch THE FIRST WORLD WAR - and the End of the Habsburg Monarchy, 1914 – 1918"
THE FIRST WORLD WAR and the End of the Habsburg Monarchy, 1914 – 1918
Entnommen aus der FWF-E-Book-Library