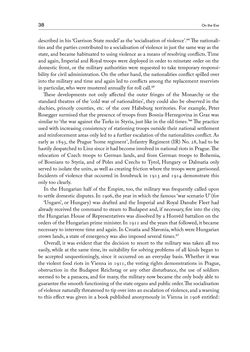 38 On the Eve described in his ‘Garrison State model’ as the ‘socialisation of violence’.64 The nationali- ties and the parties contributed to a socialisation of violence in just the same way as the state, and became habituated to using violence as a means of resolving conflicts. Time and again, Imperial and Royal troops were deployed in order to reinstate order on the domestic front, or the military authorities were requested to take temporary responsi- bility for civil administration. On the other hand, the nationalities conflict spilled over into the military and time and again led to conflicts among the replacement reservists in particular, who were mustered annually for roll call.65 These developments not only affected the outer fringes of the Monarchy or the standard theatres of the ‘cold war of nationalities’, they could also be observed in the duchies, princely counties, etc. of the core Habsburg territories. For example, Peter Rosegger surmised that the presence of troops from Bosnia-Herzegovina in Graz was similar to ‘the war against the Turks in Styria, just like in the old times.’66 The practice used with increasing consistency of stationing troops outside their national settlement and reinforcement areas only led to a further escalation of the nationalities conflict. As early as 1893, the Prague ‘home regiment’, Infantry Regiment (IR) No. 28, had to be hastily despatched to Linz since it had become involved in national riots in Prague. The relocation of Czech troops to German lands, and from German troops to Bohemia, of Bosnians to Styria, and of Poles and Czechs to Tyrol, Hungary or Dalmatia only served to isolate the units, as well as creating friction where the troops were garrisoned. Incidents of violence that occurred in Innsbruck in 1913 and 1914 demonstrate this only too clearly. In the Hungarian half of the Empire, too, the military was frequently called upon to settle domestic disputes. In 1906, the year in which the famous ‘war scenario U’ (for ‘Ungarn’, or Hungary) was drafted and the Imperial and Royal Danube Fleet had already received the command to steam to Budapest and, if necessary, fire into the city, the Hungarian House of Representatives was dissolved by a Honvéd battalion on the orders of the Hungarian prime minister. In 1911 and the years that followed, it became necessary to intervene time and again. In Croatia and Slavonia, which were Hungarian crown lands, a state of emergency was also imposed several times.67 Overall, it was evident that the decision to resort to the military was taken all too easily, while at the same time, its suitability for solving problems of all kinds began to be accepted unquestioningly, since it occurred on an everyday basis. Whether it was the violent food riots in Vienna in 1911, the voting rights demonstrations in Prague, obstruction in the Budapest Reichstag or any other disturbance, the use of soldiers seemed to be a panacea, and for many, the military now became the only body able to guarantee the smooth functioning of the state organs and public order. The socialisation of violence naturally threatened to tip over into an escalation of violence, and a warning to this effect was given in a book published anonymously in Vienna in 1908 entitled :
zurück zum  Buch THE FIRST WORLD WAR - and the End of the Habsburg Monarchy, 1914 – 1918"
THE FIRST WORLD WAR and the End of the Habsburg Monarchy, 1914 – 1918
Entnommen aus der FWF-E-Book-Library