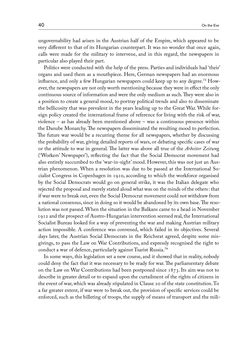 40 On the Eve ungovernability had arisen in the Austrian half of the Empire, which appeared to be very different to that of its Hungarian counterpart. It was no wonder that once again, calls were made for the military to intervene, and in this regard, the newspapers in particular also played their part. Politics were conducted with the help of the press. Parties and individuals had ‘their’ organs and used them as a mouthpiece. Here, German newspapers had an enormous influence, and only a few Hungarian newspapers could keep up to any degree.73 How- ever, the newspapers are not only worth mentioning because they were in effect the only continuous source of information and were the only medium as such. They were also in a position to create a general mood, to portray political trends and also to disseminate the bellicosity that was prevalent in the years leading up to the Great War. While for- eign policy created the international frame of reference for living with the risk of war, violence  – as has already been mentioned above  – was a continuous presence within the Danube Monarchy. The newspapers disseminated the resulting mood to perfection. The future war would be a recurring theme for all newspapers, whether by discussing the probability of war, giving detailed reports of wars, or debating specific cases of war or the attitude to war in general. The latter was above all true of the Arbeiter Zeitung (‘Workers’ Newspaper’), reflecting the fact that the Social Democrat movement had also entirely succumbed to the ‘war-in-sight’ mood. However, this was not just an Aus- trian phenomenon. When a resolution was due to be passed at the International So- cialist Congress in Copenhagen in 1910, according to which the workforce organised by the Social Democrats would go on general strike, it was the Italian delegate who rejected the proposal and merely stated aloud what was on the minds of the others : that if war were to break out, even the Social Democrat movement could not withdraw from a national consensus, since in doing so it would be abandoned by its own base. The reso- lution was not passed. When the situation in the Balkans came to a head in November 1912 and the prospect of Austro-Hungarian intervention seemed real, the International Socialist Bureau looked for a way of preventing the war and making Austrian military action impossible. A conference was convened, which failed in its objectives. Several days later, the Austrian Social Democrats in the Reichsrat agreed, despite some mis- givings, to pass the Law on War Contributions, and expressly recognised the right to conduct a war of defence, particularly against Tsarist Russia.74 In some ways, this legislation set a new course, and it showed that in reality, nobody could deny the fact that it was necessary to be ready for war. The parliamentary debate on the Law on War Contributions had been postponed since 1873. Its aim was not to describe in greater detail or to expand upon the curtailment of the rights of citizens in the event of war, which was already stipulated in Clause 20 of the state constitution. To a far greater extent, if war were to break out, the provision of specific services could be enforced, such as the billeting of troops, the supply of means of transport and the mili-
zurück zum  Buch THE FIRST WORLD WAR - and the End of the Habsburg Monarchy, 1914 – 1918"
THE FIRST WORLD WAR and the End of the Habsburg Monarchy, 1914 – 1918
Entnommen aus der FWF-E-Book-Library