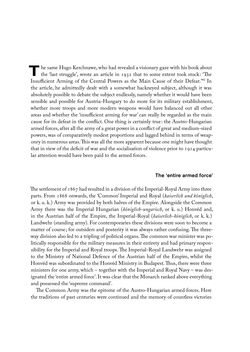 The same Hugo Kerchnawe, who had revealed a visionary gaze with his book about the ‘last struggle’, wrote an article in 1932 that to some extent took stock : ‘The Insufficient Arming of the Central Powers as the Main Cause of their Defeat.’93 In the article, he admittedly dealt with a somewhat hackneyed subject, although it was absolutely possible to debate the subject endlessly, namely whether it would have been sensible and possible for Austria-Hungary to do more for its military establishment, whether more troops and more modern weapons would have balanced out all other areas and whether the ‘insufficient arming for war’ can really be regarded as the main cause for its defeat in the conflict. One thing is certainly true : the Austro-Hungarian armed forces, after all the army of a great power in a conflict of great and medium-sized powers, was of comparatively modest proportions and lagged behind in terms of weap- onry in numerous areas. This was all the more apparent because one might have thought that in view of the deficit of war and the socialisation of violence prior to 1914 particu- lar attention would have been paid to the armed forces. The ‘entire armed force’ The settlement of 1867 had resulted in a division of the Imperial-Royal Army into three parts. From 1868 onwards, the ‘Common’ Imperial and Royal (kaiserlich und königlich, or k. u. k.) Army was provided by both halves of the Empire. Alongside the Common Army there was the Imperial Hungarian (königlich-ungarisch, or k. u.) Honvéd and, in the Austrian half of the Empire, the Imperial-Royal (kaiserlich-königlich, or k. k.) Landwehr (standing army). For contemporaries these divisions were soon to become a matter of course ; for outsiders and posterity it was always rather confusing. The three- way division also led to a tripling of political organs. The common war minister was po- litically responsible for the military measures in their entirety and had primary respon- sibility for the Imperial and Royal troops. The Imperial-Royal Landwehr was assigned to the Ministry of National Defence of the Austrian half of the Empire, whilst the Honvéd was subordinated to the Honvéd Ministry in Budapest. Thus, there were three ministers for one army, which  – together with the Imperial and Royal Navy  – was des- ignated the ‘entire armed force’. It was clear that the Monarch ranked above everything and possessed the ‘supreme command’. The Common Army was the epitome of the Austro-Hungarian armed forces. Here the traditions of past centuries were continued and the memory of countless victories
zurück zum  Buch THE FIRST WORLD WAR - and the End of the Habsburg Monarchy, 1914 – 1918"
THE FIRST WORLD WAR and the End of the Habsburg Monarchy, 1914 – 1918
Entnommen aus der FWF-E-Book-Library