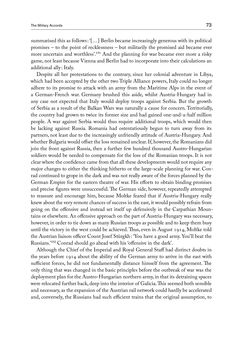 The﻿ Military﻿ Accords 73 summarised this as follows : ‘[…] Berlin became increasingly generous with its political promises  – to the point of recklessness  – but militarily the promised aid became ever more uncertain and worthless’.151 And the planning for war became ever more a risky game, not least because Vienna and Berlin had to incorporate into their calculations an additional ally : Italy. Despite all her protestations to the contrary, since her colonial adventure in Libya, which had been accepted by the other two Triple Alliance powers, Italy could no longer adhere to its promise to attack with an army from the Maritime Alps in the event of a German-French war. Germany brushed this aside, whilst Austria-Hungary had in any case not expected that Italy would deploy troops against Serbia. But the growth of Serbia as a result of the Balkan Wars was naturally a cause for concern. Territorially, the country had grown to twice its former size and had gained one-and-a-half million people. A war against Serbia would thus require additional troops, which would then be lacking against Russia. Romania had ostentatiously begun to turn away from its partners, not least due to the increasingly unfriendly attitude of Austria-Hungary. And whether Bulgaria would offset the loss remained unclear. If, however, the Romanians did join the front against Russia, then a further few hundred thousand Austro-Hungarian soldiers would be needed to compensate for the loss of the Romanian troops. It is not clear where the confidence came from that all these developments would not require any major changes to either the thinking hitherto or the large-scale planning for war. Con- rad continued to grope in the dark and was not really aware of the forces planned by the German Empire for the eastern theatre of war. His efforts to obtain binding promises and precise figures were unsuccessful. The German side, however, repeatedly attempted to reassure and encourage him, because Moltke feared that if Austria-Hungary really knew about the very remote chances of success in the east, it would possibly refrain from going on the offensive and instead set itself up defensively in the Carpathian Moun- tains or elsewhere. An offensive approach on the part of Austria-Hungary was necessary, however, in order to tie down as many Russian troops as possible and to keep them busy until the victory in the west could be achieved. Thus, even in August 1914, Moltke told the Austrian liaison officer Count Josef Stürgkh : ‘You have a good army. You’ll beat the Russians.’152 Conrad should go ahead with his ‘offensive in the dark’. Although the Chief of the Imperial and Royal General Staff had distinct doubts in the years before 1914 about the ability of the German army to arrive in the east with sufficient forces, he did not fundamentally distance himself from the agreement. The only thing that was changed in the basic principles before the outbreak of war was the deployment plan for the Austro-Hungarian northern army, in that its detraining spaces were relocated further back, deep into the interior of Galicia. This seemed both sensible and necessary, as the expansion of the Austrian rail network could hardly be accelerated and, conversely, the Russians had such efficient trains that the original assumption, to
zurück zum  Buch THE FIRST WORLD WAR - and the End of the Habsburg Monarchy, 1914 – 1918"
THE FIRST WORLD WAR and the End of the Habsburg Monarchy, 1914 – 1918
Entnommen aus der FWF-E-Book-Library