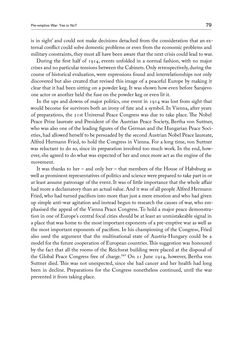 Pre-emptive﻿ War:﻿ Yes﻿ or﻿ No? 79 is in sight’ and could not make decisions detached from the consideration that an ex- ternal conflict could solve domestic problems or even from the economic problems and military constraints, they must all have been aware that the next crisis could lead to war. During the first half of 1914, events unfolded in a normal fashion, with no major crises and no particular tensions between the Cabinets. Only retrospectively, during the course of historical evaluation, were expressions found and interrelationships not only discovered but also created that revised this image of a peaceful Europe by making it clear that it had been sitting on a powder keg. It was shown how even before Sarajevo one actor or another held the fuse on the powder keg or even lit it. In the ups and downs of major politics, one event in 1914 was lost from sight that would become for survivors both an irony of fate and a symbol. In Vienna, after years of preparations, the 21st Universal Peace Congress was due to take place. The Nobel Peace Prize laureate and President of the Austrian Peace Society, Bertha von Suttner, who was also one of the leading figures of the German and the Hungarian Peace Soci- eties, had allowed herself to be persuaded by the second Austrian Nobel Peace laureate, Alfred Hermann Fried, to hold the Congress in Vienna. For a long time, von Suttner was reluctant to do so, since its preparation involved too much work. In the end, how- ever, she agreed to do what was expected of her and once more act as the engine of the movement. It was thanks to her  – and only her  – that members of the House of Habsburg as well as prominent representatives of politics and science were prepared to take part in or at least assume patronage of the event. It was of little importance that the whole affair had more a declamatory than an actual value. And it was of all people Alfred Hermann Fried, who had turned pacifism into more than just a mere emotion and who had given up simple anti-war agitation and instead begun to research the causes of war, who em- phasised the appeal of the Vienna Peace Congress. To hold a major peace demonstra- tion in one of Europe’s central focal cities should be at least an unmistakeable signal in a place that was home to the most important exponents of a pre-emptive war as well as the most important exponents of pacifism. In his championing of the Congress, Fried also used the argument that the multinational state of Austria-Hungary could be a model for the future cooperation of European countries. This suggestion was honoured by the fact that all the rooms of the Reichsrat building were placed at the disposal of the Global Peace Congress free of charge.167 On 21 June 1914, however, Bertha von Suttner died. This was not unexpected, since she had cancer and her health had long been in decline. Preparations for the Congress nonetheless continued, until the war prevented it from taking place.
zurück zum  Buch THE FIRST WORLD WAR - and the End of the Habsburg Monarchy, 1914 – 1918"
THE FIRST WORLD WAR and the End of the Habsburg Monarchy, 1914 – 1918
Entnommen aus der FWF-E-Book-Library