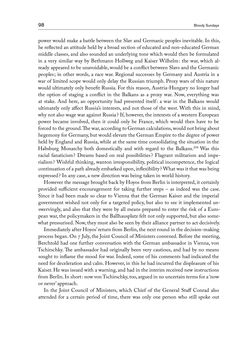 98 Bloody Sundays power would make a battle between the Slav and Germanic peoples inevitable. In this, he reflected an attitude held by a broad section of educated and non-educated German middle classes, and also sounded an underlying tone which would then be formulated in a very similar way by Bethmann Hollweg and Kaiser Wilhelm : the war, which al- ready appeared to be unavoidable, would be a conflict between Slavs and the Germanic peoples ; in other words, a race war. Regional successes by Germany and Austria in a war of limited scope would only delay the Russian triumph. Proxy wars of this nature would ultimately only benefit Russia. For this reason, Austria-Hungary no longer had the option of staging a conflict in the Balkans as a proxy war. Now, everything was at stake. And here, an opportunity had presented itself : a war in the Balkans would ultimately only affect Russia’s interests, and not those of the west. With this in mind, why not also wage war against Russia ? If, however, the interests of a western European power became involved, then it could only be France, which would then have to be forced to the ground. The war, according to German calculations, would not bring about hegemony for Germany, but would elevate the German Empire to the degree of power held by England and Russia, while at the same time consolidating the situation in the Habsburg Monarchy both domestically and with regard to the Balkans.210 Was this racial fanaticism ? Dreams based on real possibilities ? Flagrant militarism and impe- rialism ? Wishful thinking, wanton irresponsibility, political incompetence, the logical continuation of a path already embarked upon, inflexibility ? What was it that was being expressed ? In any case, a new direction was being taken in world history. However the message brought back by Hoyos from Berlin is interpreted, it certainly provided sufficient encouragement for taking further steps  – as indeed was the case. Since it had been made so clear to Vienna that the German Kaiser and the imperial government wished not only for a targeted policy, but also to see it implemented un- swervingly, and also that they were by all means prepared to enter the risk of a Euro- pean war, the policymakers in the Ballhausplatz felt not only supported, but also some- what pressurised. Now, they must also be seen by their alliance partner to act decisively. Immediately after Hoyos’ return from Berlin, the next round in the decision-making process began. On 7 July, the Joint Council of Ministers convened. Before the meeting, Berchtold had one further conversation with the German ambassador in Vienna, von Tschirschky. The ambassador had originally been very cautious, and had by no means sought to inflame the mood for war. Indeed, some of his comments had indicated the need for deceleration and calm. However, in this he had incurred the displeasure of his Kaiser. He was issued with a warning, and had in the interim received new instructions from Berlin. In short : now von Tschirschky, too, argued in no uncertain terms for a ‘now or never’ approach. In the Joint Council of Ministers, which Chief of the General Staff Conrad also attended for a certain period of time, there was only one person who still spoke out
zurück zum  Buch THE FIRST WORLD WAR - and the End of the Habsburg Monarchy, 1914 – 1918"
THE FIRST WORLD WAR and the End of the Habsburg Monarchy, 1914 – 1918
Entnommen aus der FWF-E-Book-Library