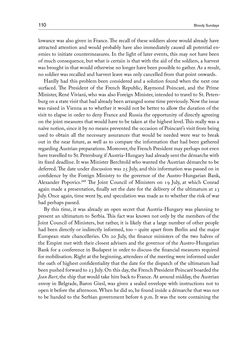 110 Bloody Sundays lowance was also given in France. The recall of these soldiers alone would already have attracted attention and would probably have also immediately caused all potential en- emies to initiate countermeasures. In the light of later events, this may not have been of much consequence, but what is certain is that with the aid of the soldiers, a harvest was brought in that would otherwise no longer have been possible to gather. As a result, no soldier was recalled and harvest leave was only cancelled from that point onwards. Hardly had this problem been considered and a solution found when the next one surfaced. The President of the French Republic, Raymond Poincaré, and the Prime Minister, René Viviani, who was also Foreign Minister, intended to travel to St. Peters- burg on a state visit that had already been arranged some time previously. Now the issue was raised in Vienna as to whether it would not be better to allow the duration of the visit to elapse in order to deny France and Russia the opportunity of directly agreeing on the joint measures that would have to be taken at the highest level. This really was a naïve notion, since it by no means prevented the occasion of Poincaré’s visit from being used to obtain all the necessary assurances that would be needed were war to break out in the near future, as well as to compare the information that had been gathered regarding Austrian preparations. Moreover, the French President may perhaps not even have travelled to St. Petersburg if Austria-Hungary had already sent the démarche with its fixed deadline. It was Minister Berchtold who wanted the Austrian démarche to be deferred. The date under discussion was 25 July, and this information was passed on in confidence by the Foreign Ministry to the governor of the Austro-Hungarian Bank, Alexander Popovics.245 The Joint Council of Ministers on 19 July, at which Conrad again made a presentation, finally set the date for the delivery of the ultimatum at 23 July. Once again, time went by, and speculation was made as to whether the risk of war had perhaps passed. By this time, it was already an open secret that Austria-Hungary was planning to present an ultimatum to Serbia. This fact was known not only by the members of the Joint Council of Ministers, but rather, it is likely that a large number of other people had been directly or indirectly informed, too  – quite apart from Berlin and the major European state chancelleries. On 20 July, the finance ministers of the two halves of the Empire met with their closest advisers and the governor of the Austro-Hungarian Bank for a conference in Budapest in order to discuss the financial measures required for mobilisation. Right at the beginning, attendees of the meeting were informed under the oath of highest confidentiality that the date for the dispatch of the ultimatum had been pushed forward to 23 July. On this day, the French President Poincaré boarded the Jean Bart, the ship that would take him back to France. At around midday, the Austrian envoy in Belgrade, Baron Giesl, was given a sealed envelope with instructions not to open it before the afternoon. When he did so, he found inside a démarche that was not to be handed to the Serbian government before 6 p.m. It was the note containing the
zurück zum  Buch THE FIRST WORLD WAR - and the End of the Habsburg Monarchy, 1914 – 1918"
THE FIRST WORLD WAR and the End of the Habsburg Monarchy, 1914 – 1918
Entnommen aus der FWF-E-Book-Library