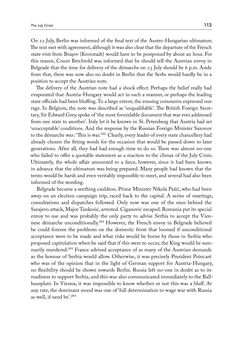 The﻿ July﻿ Crisis 113 On 22 July, Berlin was informed of the final text of the Austro-Hungarian ultimatum. The text met with agreement, although it was also clear that the departure of the French state visit from Braşov (Kronstadt) would have to be postponed by about an hour. For this reason, Count Berchtold was informed that he should tell the Austrian envoy in Belgrade that the time for delivery of the démarche on 23 July should be 6 p.m. Aside from that, there was now also no doubt in Berlin that the Serbs would hardly be in a position to accept the Austrian note. The delivery of the Austrian note had a shock effect. Perhaps the belief really had evaporated that Austria-Hungary would act in such a manner, or perhaps the leading state officials had been bluffing. To a large extent, the ensuing comments expressed out- rage. In Belgium, the note was described as ‘unqualifiable’. The British Foreign Secre- tary, Sir Edward Grey, spoke of ‘the most formidable document that was ever addressed from one state to another’. Italy let it be known in St. Petersburg that Austria had set ‘unacceptable’ conditions. And the response by the Russian Foreign Minister Sazonov to the démarche was : ‘This is war.’251 Clearly, every leader of every state chancellery had already chosen the fitting words for the occasion that would be passed down to later generations. After all, they had had enough time to do so. There was almost no-one who failed to offer a quotable statement as a reaction to the climax of the July Crisis. Ultimately, the whole affair amounted to a farce, however, since it had been known in advance that the ultimatum was being prepared. Many people had known that the terms would be harsh and even veritably impossible to meet, and several had also been informed of the wording. Belgrade became a seething cauldron. Prime Minister Nikola Pašić, who had been away on an election campaign trip, raced back to the capital. A series of meetings, consultations and dispatches followed. Only now was one of the men behind the Sarajevo attack, Major Tankosić, arrested. Ciganović escaped. Romania put its special envoy to use and was probably the only party to advise Serbia to accept the Vien- nese démarche unconditionally.252 However, the French envoy in Belgrade believed he could foresee the problems on the domestic front that loomed if unconditional acceptance were to be made and what risks would be borne by those in Serbia who proposed capitulation when he said that if this were to occur, the King would be sum- marily murdered.253 France advised acceptance of as many of the Austrian demands as the honour of Serbia would allow. Otherwise, it was precisely President Poincaré who was of the opinion that in the light of German support for Austria-Hungary, no flexibility should be shown towards Berlin. Russia left no-one in doubt as to its readiness to support Serbia, and this was also communicated immediately to the Ball- hausplatz. In Vienna, it was impossible to know whether or not this was a bluff. At any rate, the dominant mood was one of ‘full determination to wage war with Russia as well, if need be’.254
zurück zum  Buch THE FIRST WORLD WAR - and the End of the Habsburg Monarchy, 1914 – 1918"
THE FIRST WORLD WAR and the End of the Habsburg Monarchy, 1914 – 1918
Entnommen aus der FWF-E-Book-Library