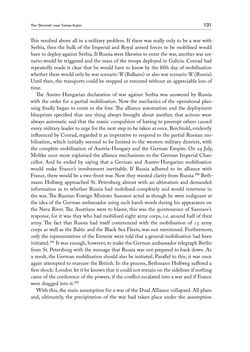 The﻿ ‘Skirmish’﻿ near﻿ Temes-Kubin 131 This resulted above all in a military problem. If there was really only to be a war with Serbia, then the bulk of the Imperial and Royal armed forces to be mobilised would have to deploy against Serbia. If Russia were likewise to enter the war, another war sce- nario would be triggered and the mass of the troops deployed in Galicia. Conrad had repeatedly made it clear that he would have to know by the fifth day of mobilisation whether there would only be war scenario ‘B’ (Balkans) or also war scenario ‘R’ (Russia). Until then, the transports could be stopped or rerouted without an appreciable loss of time. The Austro-Hungarian declaration of war against Serbia was answered by Russia with the order for a partial mobilisation. Now the mechanics of the operational plan- ning finally began to come to the fore. The alliance automatism and the deployment blueprints specified that one thing always brought about another, that actions were always automatic and that the manic compulsion of having to preempt others caused every military leader to urge for the next step to be taken at once. Berchtold, evidently influenced by Conrad, regarded it as imperative to respond to the partial Russian mo- bilisation, which initially seemed to be limited to the western military districts, with the complete mobilisation of Austria-Hungary and the German Empire. On 29 July, Moltke once more explained the alliance mechanisms to the German Imperial Chan- cellor. And he ended by saying that a German and Austro-Hungarian mobilisation would make France’s involvement inevitable. If Russia adhered to its alliance with France, there would be a two-front war. Now they wanted clarity from Russia.290 Beth- mann Hollweg approached St. Petersburg almost with an ultimatum and demanded information as to whether Russia had mobilised completely and would intervene in the war. The Russian Foreign Minister Sazonov acted as though he were indignant at the idea of the German ambassador using such harsh words during his appearance on the Neva River. The Austrians were to blame, this was the quintessence of Sazonov’s response, for it was they who had mobilised eight army corps, i.e. around half of their army. The fact that Russia had itself commenced with the mobilisation of 13 army corps as well as the Baltic and the Black Sea Fleets, was not mentioned. Furthermore, only the representatives of the Entente were told that a general mobilisation had been initiated.291 It was enough, however, to make the German ambassador telegraph Berlin from St. Petersburg with the message that Russia was not prepared to back down. As a result, the German mobilisation should also be initiated. Parallel to this, it was once again attempted to reassure the British. In the process, Bethmann Hollweg suffered a first shock : London let it be known that it could not remain on the sidelines if nothing came of the conference of the powers, if the conflict escalated into a war and if France were dragged into it.292 With this, the main assumption for a war of the Dual Alliance collapsed. All plans and, ultimately, the precipitation of the war had taken place under the assumption
zurück zum  Buch THE FIRST WORLD WAR - and the End of the Habsburg Monarchy, 1914 – 1918"
THE FIRST WORLD WAR and the End of the Habsburg Monarchy, 1914 – 1918
Entnommen aus der FWF-E-Book-Library