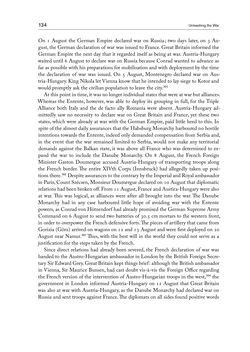 134 Unleashing the War On 1 August the German Empire declared war on Russia ; two days later, on 3 Au- gust, the German declaration of war was issued to France. Great Britain informed the German Empire the next day that it regarded itself as being at war. Austria-Hungary waited until 6 August to declare war on Russia because Conrad wanted to advance as far as possible with his preparations for mobilisation and with deployment by the time the declaration of war was issued. On 5 August, Montenegro declared war on Aus- tria-Hungary. King Nikola let Vienna know that he intended to lay siege to Kotor and would promptly ask the civilian population to leave the city.301 At this point in time, it was no longer individual states that were at war but alliances. Whereas the Entente, however, was able to deploy its grouping in full, for the Triple Alliance both Italy and the de facto ally Romania were absent. Austria-Hungary ad- mittedly saw no necessity to declare war on Great Britain and France, yet these two states, which were already at war with the German Empire, paid little heed to this. In spite of the almost daily assurances that the Habsburg Monarchy harboured no hostile intentions towards the Entente, indeed only demanded compensation from Serbia and, in the event that the war remained limited to Serbia, would not make any territorial demands against the Balkan state, it was above all France who was determined to ex- pand the war to include the Danube Monarchy. On 8 August, the French Foreign Minister Gaston Doumergue accused Austria-Hungary of transporting troops along the French border. The entire XIVth Corps (Innsbruck) had allegedly taken up posi- tions there.302 Despite assurances to the contrary by the Imperial and Royal ambassador in Paris, Count Szécsen, Monsieur Doumergue declared on 10 August that diplomatic relations had been broken off. From 11 August, France and Austira-Hungary were also at war. This was logical, as alliances were after all brought into the war. The Danube Monarchy had in any case harboured little hope of avoiding war with the Entente powers, as Conrad von Hötzendorf had already promised the German Supreme Army Command on 6 August to send two batteries of 30.5 cm mortars to the western front, in order to overpower the French defensive forts. The pieces of artillery that came from Gorizia (Görz) arrived on wagons on 12 and 13 August and were first deployed on 20 August near Namur.303 Thus, with the best will in the world they could not serve as a justification for the steps taken by the French. Since direct relations had already been severed, the French declaration of war was handed to the Austro-Hungarian ambassador in London by the British Foreign Secre- tary Sir Edward Grey. Great Britain kept things brief : although the British ambassador in Vienna, Sir Maurice Bunsen, had cast doubt vis-à-vis the Foreign Office regarding the French version of the intervention of Austro-Hungarian troops in the west,304 the government in London informed Austria-Hungary on 12 August that Great Britain was also at war with Austria-Hungary, as the Danube Monarchy had declared war on Russia and sent troops against France. The diplomats on all sides found positive words
zurück zum  Buch THE FIRST WORLD WAR - and the End of the Habsburg Monarchy, 1914 – 1918"
THE FIRST WORLD WAR and the End of the Habsburg Monarchy, 1914 – 1918
Entnommen aus der FWF-E-Book-Library