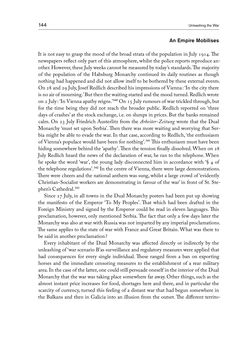 144 Unleashing the War An Empire Mobilises It is not easy to grasp the mood of the broad strata of the population in July 1914. The newspapers reflect only part of this atmosphere, whilst the police reports reproduce an- other. However, these July weeks cannot be measured by today’s standards. The majority of the population of the Habsburg Monarchy continued its daily routines as though nothing had happened and did not allow itself to be bothered by these external events. On 28 and 29 July, Josef Redlich described his impressions of Vienna : ‘In the city there is no air of mourning.’ But then the waiting started and the mood turned. Redlich wrote on 2 July : ‘In Vienna apathy reigns.’340 On 15 July rumours of war trickled through, but for the time being they did not reach the broader public. Redlich reported on ‘three days of crashes’ at the stock exchange, i.e. on slumps in prices. But the banks remained calm. On 23 July Friedrich Austerlitz from the Arbeiter-Zeitung wrote that the Dual Monarchy ‘must set upon Serbia’. Then there was more waiting and worrying that Ser- bia might be able to evade the war. In that case, according to Redlich, ‘the enthusiasm of Vienna’s populace would have been for nothing’.341 This enthusiasm must have been hiding somewhere behind the ‘apathy’. Then the tension finally dissolved. When on 28 July Redlich heard the news of the declaration of war, he ran to the telephone. When he spoke the word ‘war’, the young lady disconnected him in accordance with ‘§ 4 of the telephone regulations’.342 In the centre of Vienna, there were large demonstrations. There were cheers and the national anthem was sung, whilst a large crowd of ‘evidently Christian-Socialist workers are demonstrating in favour of the war’ in front of St. Ste- phen’s Cathedral.343 Since 27 July, in all towns in the Dual Monarchy posters had been put up showing the manifesto of the Emperor ‘To My Peoples’. That which had been drafted in the Foreign Ministry and signed by the Emperor could be read in eleven languages. This proclamation, however, only mentioned Serbia. The fact that only a few days later the Monarchy was also at war with Russia was not imparted by any imperial proclamations. The same applies to the state of war with France and Great Britain. What was there to be said in another proclamation ? Every inhabitant of the Dual Monarchy was affected directly or indirectly by the unleashing of ‘war scenario B’as surveillance and regulatory measures were applied that had consequences for every single individual. These ranged from a ban on exporting horses and the immediate censoring measures to the establishment of a rear military area. In the case of the latter, one could still persuade oneself in the interior of the Dual Monarchy that the war was taking place somewhere far away. Other things, such as the almost instant price increases for food, shortages here and there, and in particular the scarcity of currency, turned this feeling of a distant war that had begun somewhere in the Balkans and then in Galicia into an illusion from the outset. The different territo-
zurück zum  Buch THE FIRST WORLD WAR - and the End of the Habsburg Monarchy, 1914 – 1918"
THE FIRST WORLD WAR and the End of the Habsburg Monarchy, 1914 – 1918
Entnommen aus der FWF-E-Book-Library