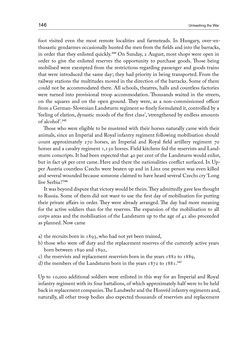 146 Unleashing the War foot visited even the most remote localities and farmsteads. In Hungary, over-en- thusastic gendarmes occasionally hunted the men from the fields and into the barracks, in order that they enlisted quickly.344 On Sunday, 2 August, most shops were open in order to give the enlisted reserves the opportunity to purchase goods. Those being mobilised were exempted from the restrictions regarding passenger and goods trains that were introduced the same day ; they had priority in being transported. From the railway stations the multitudes moved in the direction of the barracks. Some of them could not be accommodated there. All schools, theatres, halls and countless factories were turned into provisional troop accommodation. Thousands waited in the streets, on the squares and on the open ground. They were, as a non-commissioned officer from a German-Slovenian Landsturm regiment so finely formulated it, controlled by a ‘feeling of elation, dynastic moods of the first class’, ‘strengthened by endless amounts of alcohol’.345 Those who were eligible to be mustered with their horses naturally came with their animals, since an Imperial and Royal infantry regiment following mobilisation should count approximately 270 horses, an Imperial and Royal field artillery regiment 70 horses and a cavalry regiment 1,150 horses. Field kitchens fed the reservists and Land- sturm conscripts. It had been expected that 40 per cent of the Landsturm would enlist, but in fact 98 per cent came. Here and there the nationalities conflict surfaced. In Up- per Austria countless Czechs were beaten up and in Linz one person was even killed and several wounded because someone claimed to have heard several Czechs cry ‘Long live Serbia !’346 It was beyond dispute that victory would be theirs. They admittedly gave less thought to Russia. Some of them did not want to use the first day of mobilisation for putting their private affairs in order. They were already arranged. The day had more meaning for the active soldiers than for the reserves. The expansion of the mobilisation to all corps areas and the mobilisation of the Landsturm up to the age of 42 also proceeded as planned. Now came a) the recruits born in 1893, who had not yet been trained, b) those who were off duty and the replacement reserves of the currently active years born between 1890 and 1892, c) the reservists and replacement reservists born in the years 1882 to 1889, d) the members of the Landsturm born in the years 1872 to 1881.347 Up to 10,000 additional soldiers were enlisted in this way for an Imperial and Royal infantry regiment with its four battalions, of which approximately half were to be held back in replacement companies. The Landwehr and the Honvéd infantry regiments and, naturally, all other troop bodies also expected thousands of reservists and replacement
zurück zum  Buch THE FIRST WORLD WAR - and the End of the Habsburg Monarchy, 1914 – 1918"
THE FIRST WORLD WAR and the End of the Habsburg Monarchy, 1914 – 1918
Entnommen aus der FWF-E-Book-Library