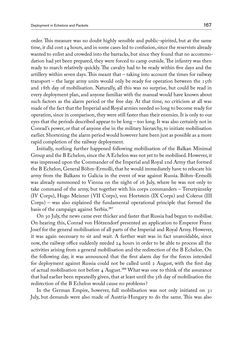 Deployment﻿ in﻿ Echelons﻿ and﻿ Packets 167 order. This measure was no doubt highly sensible and public-spirited, but at the same time, it did cost 24 hours, and in some cases led to confusion, since the reservists already wanted to enlist and crowded into the barracks, but since they found that no accommo- dation had yet been prepared, they were forced to camp outside. The infantry was then ready to march relatively quickly. The cavalry had to be ready within five days and the artillery within seven days. This meant that  – taking into account the times for railway transport  – the large army units would only be ready for operation between the 15th and 18th day of mobilisation. Naturally, all this was no surprise, but could be read in every deployment plan, and anyone familiar with the manual would have known about such factors as the alarm period or the free day. At that time, no criticism at all was made of the fact that the Imperial and Royal armies needed so long to become ready for operation, since in comparison, they were still faster than their enemies. It is only to our eyes that the periods described appear to be long  – too long. It was also certainly not in Conrad’s power, or that of anyone else in the military hierarchy, to initiate mobilisation earlier. Shortening the alarm period would however have been just as possible as a more rapid completion of the railway deployment. Initially, nothing further happened following mobilisation of the Balkan Minimal Group and the B Echelon, since the A Echelon was not yet to be mobilised. However, it was impressed upon the Commander of the Imperial and Royal 2nd Army that formed the B Echelon, General Böhm-Ermolli, that he would immediately have to relocate his army from the Balkans to Galicia in the event of war against Russia. Böhm-Ermolli was already summoned to Vienna on the night of 26 July, where he was not only to take command of the army, but together with his corps commanders  – Tersztyánszky (IV Corps), Hugo Meixner (VII Corps), von Hortstein (IX Corps) and Colerus (III Corps)  – was also explained the fundamental operational principle that formed the basis of the campaign against Serbia.387 On 30 July, the news came ever thicker and faster that Russia had begun to mobilise. On hearing this, Conrad von Hötzendorf presented an application to Emperor Franz Josef for the general mobilisation of all parts of the Imperial and Royal Army. However, it was again necessary to sit and wait. A further wait was in fact unavoidable, since now, the railway office suddenly needed 24 hours in order to be able to process all the activities arising from a general mobilisation and the redirection of the B Echelon. On the following day, it was announced that the first alarm day for the forces intended for deployment against Russia could not be called until 2 August, with the first day of actual mobilisation not before 4 August.388 What was one to think of the assurance that had earlier been repeatedly given, that at least until the 5th day of mobilisation the redirection of the B Echelon would cause no problems ? In the German Empire, however, full mobilisation was not only initiated on 31 July, but demands were also made of Austria-Hungary to do the same. This was also
zurück zum  Buch THE FIRST WORLD WAR - and the End of the Habsburg Monarchy, 1914 – 1918"
THE FIRST WORLD WAR and the End of the Habsburg Monarchy, 1914 – 1918
Entnommen aus der FWF-E-Book-Library