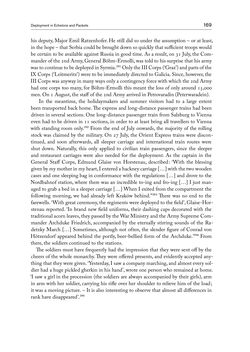 Deployment﻿ in﻿ Echelons﻿ and﻿ Packets 169 his deputy, Major Emil Ratzenhofer. He still did so under the assumption  – or at least, in the hope  – that Serbia could be brought down so quickly that sufficient troops would be certain to be available against Russia in good time. As a result, on 31 July, the Com- mander of the 2nd Army, General Böhm-Ermolli, was told to his surprise that his army was to continue to be deployed in Syrmia.391 Only the III Corps (‘Graz’) and parts of the IX Corps (‘Leitmeritz’) were to be immediately directed to Galicia. Since, however, the III Corps was anyway in many ways only a contingency force with which the 2nd Army had one corps too many, for Böhm-Ermolli this meant the loss of only around 15,000 men. On 1 August, the staff of the 2nd Army arrived in Petrovaradin (Peterwaradein). In the meantime, the holidaymakers and summer visitors had to a large extent been transported back home. The express and long-distance passenger trains had been driven in several sections. One long-distance passenger train from Salzburg to Vienna even had to be driven in 11 sections, in order to at least bring all travellers to Vienna with standing room only.392 From the end of July onwards, the majority of the rolling stock was claimed by the military. On 27 July, the Orient Express trains were discon- tinued, and soon afterwards, all sleeper carriage and international train routes were shut down. Naturally, this only applied to civilian train passengers, since the sleeper and restaurant carriages were also needed for the deployment. As the captain in the General Staff Corps, Edmund Glaise von Horstenau, described : ‘With the blessing given by my mother in my heart, I entered a hackney carriage […] with the two wooden cases and one sleeping bag in conformance with the regulations […] and drove to the Nordbahnof station, where there was an incredible to-ing and fro-ing […] I just man- aged to grab a bed in a sleeper carriage […] When I exited from the compartment the following morning, we had already left Kraków behind.”393 There was no end to the farewells. ‘With great ceremony, the regiments were deployed to the field’, Glaise-Hor- stenau reported. ‘In brand new field uniforms, their dashing caps decorated with the traditional acorn leaves, they passed by the War Ministry and the Army Supreme Com- mander Archduke Friedrich, accompanied by the eternally stirring sounds of the Ra- detzky March […] Sometimes, although not often, the slender figure of Conrad von Hötzendorf appeared behind the portly, beer-bellied form of the Archduke.’394 From there, the soldiers continued to the stations. The soldiers must have frequently had the impression that they were sent off by the cheers of the whole monarchy. They were offered presents, and evidently accepted any- thing that they were given. ‘Yesterday, I saw a company marching, and almost every sol- dier had a huge pickled gherkin in his hand’, wrote one person who remained at home. ‘I saw a girl in the procession (the soldiers are always accompanied by their girls), arm in arm with her soldier, carrying his rifle over her shoulder to relieve him of the load ; it was a moving picture.  – It is also interesting to observe that almost all differences in rank have disappeared’.395
zurück zum  Buch THE FIRST WORLD WAR - and the End of the Habsburg Monarchy, 1914 – 1918"
THE FIRST WORLD WAR and the End of the Habsburg Monarchy, 1914 – 1918
Entnommen aus der FWF-E-Book-Library