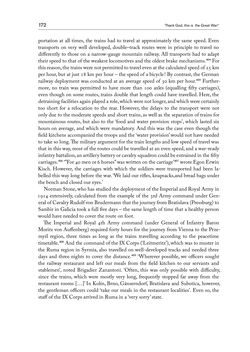 172 ‘Thank God, this is the Great War!’ portation at all times, the trains had to travel at approximately the same speed. Even transports on very well developed, double–track routes were in principle to travel no differently to those on a narrow-gauge mountain railway. All transports had to adapt their speed to that of the weakest locomotives and the oldest brake mechanisms.404 For this reason, the trains were not permitted to travel even at the calculated speed of 25 km per hour, but at just 18 km per hour  – the speed of a bicycle ! By contrast, the German railway deployment was conducted at an average speed of 30 km per hour.405 Further- more, no train was permitted to have more than 100 axles (equalling fifty carriages), even though on some routes, trains double that length could have travelled. Here, the detraining facilities again played a role, which were not longer, and which were certainly too short for a relocation to the rear. However, the delays to the transport were not only due to the moderate speeds and short trains, as well as the separation of trains for mountainous routes, but also to the ‘food and water provision stops’, which lasted six hours on average, and which were mandatory. And this was the case even though the field kitchens accompanied the troops and the ‘water provision’ would not have needed to take so long. The military argument for the train lengths and low speed of travel was that in this way, most of the routes could be travelled at an even speed, and a war-ready infantry battalion, an artillery battery or cavalry squadron could be entrained in the fifty carriages.406 ‘”For 40 men or 6 horses” was written on the carriage’407 wrote Egon Erwin Kisch. However, the carriages with which the soldiers were transported had been la- belled this way long before the war. ‘We laid our rifles, knapsacks,and bread bags under the bench and closed our eyes.’ Norman Stone, who has studied the deployment of the Imperial and Royal Army in 1914 extensively, calculated from the example of the 3rd Army command under Gen- eral of Cavalry Rudolf von Brudermann that the journey from Bratislava (Pressburg) to Sambir in Galicia took a full five days  – the same length of time that a healthy person would have needed to cover the route on foot. The Imperial and Royal 4th Army command (under General of Infantry Baron Moritz von Auffenberg) required forty hours for the journey from Vienna to the Prze- myśl region, three times as long as the trains travelling according to the peacetime timetable.408 And the command of the IX Corps (‘Leitmeritz’), which was to muster in the Ruma region in Syrmia, also travelled on well-developed tracks and needed three days and three nights to cover the distance.409 ‘Wherever possible, we officers sought the railway restaurant and left our meals from the field kitchen to our servants and stablemen’, noted Brigadier Zanantoni. ‘Often, this was only possible with difficulty, since the trains, which were mostly very long, frequently stopped far away from the restaurant rooms […]’ In Kolín, Brno, Gänserndorf, Bratislava and Subotica, however, the gentleman officers could ‘take our meals in the restaurant localities’. Even so, the staff of the IX Corps arrived in Ruma in a ‘very sorry’ state.
zurück zum  Buch THE FIRST WORLD WAR - and the End of the Habsburg Monarchy, 1914 – 1918"
THE FIRST WORLD WAR and the End of the Habsburg Monarchy, 1914 – 1918
Entnommen aus der FWF-E-Book-Library