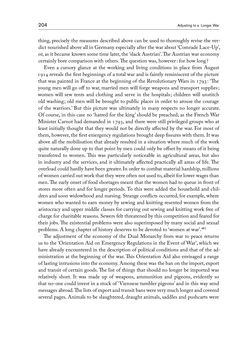 204 Adjusting to a Longer War thing, precisely the measures described above can be used to thoroughly revise the ver- dict nourished above all in Germany especially after the war about ‘Comrade Lace-Up’, or, as it became known some time later, the ‘slack Austrian’. The Austrian war economy certainly bore comparison with others. The question was, however : for how long ? Even a cursory glance at the working and living conditions in place from August 1914 reveals the first beginnings of a total war and is faintly reminiscent of the picture that was painted in France at the beginning of the Revolutionary Wars in 1793 : ‘The young men will go off to war, married men will forge weapons and transport supplies ; women will sew tents and clothing and serve in the hospitals ; children will unstitch old washing ; old men will be brought to public places in order to arouse the courage of the warriors.’ But this picture was ultimately in many respects no longer accurate. Of course, in this case no ‘hatred for the king’ should be preached, as the French War Minister Carnot had demanded in 1793, and there were still privileged groups who at least initially thought that they would not be directly affected by the war. For most of them, however, the first emergency regulations brought deep fissures with them. It was above all the mobilisation that already resulted in a situation where much of the work quite naturally done up to that point by men could only be offset by means of it being transferred to women. This was particularly noticeable in agricultural areas, but also in industry and the services, and it ultimately affected practically all areas of life. The overload could hardly have been greater. In order to combat material hardship, millions of women carried out work that they were often not used to, albeit for lower wages than men. The early onset of food shortages meant that the women had to queue in front of stores more often and for longer periods. To this were added the household and chil- dren and soon widowhood and nursing. Strange conflicts occurred, for example, where women who wanted to earn money by sewing and knitting resented women from the aristocracy and upper middle classes for carrying out sewing and knitting work free of charge for charitable reasons. Sewers felt threatened by this competition and feared for their jobs. The existential problems were also superimposed by many social and sexual problems. A long chapter of history deserves to be devoted to ‘women at war’.481 The adjustment of the economy of the Dual Monarchy from war to peace returns us to the ‘Orientation Aid on Emergency Regulations in the Event of War’, which we have already encountered in the description of political conditions and that of the ad- ministration at the beginning of the war. This Orientation Aid also envisaged a range of lasting intrusions into the economy. Among these was the ban on the import, export and transit of certain goods. The list of things that should no longer be imported was relatively short. It was made up of weapons, ammunition and pigeons, evidently so that no-one could invest in a stock of ‘Viennese tumbler pigeons’ and in this way send messages abroad. The lists of export and transit bans were very much longer and covered several pages. Animals to be slaughtered, draught animals, saddles and pushcarts were
zurück zum  Buch THE FIRST WORLD WAR - and the End of the Habsburg Monarchy, 1914 – 1918"
THE FIRST WORLD WAR and the End of the Habsburg Monarchy, 1914 – 1918
Entnommen aus der FWF-E-Book-Library