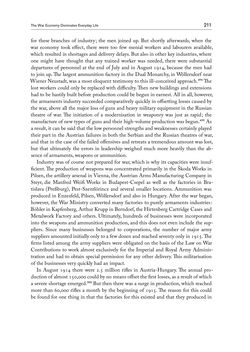 The﻿ War﻿ Economy﻿ Dominates﻿ Everyday﻿ Life 211 for these branches of industry ; the men joined up. But shortly afterwards, when the war economy took effect, there were too few menial workers and labourers available, which resulted in shortages and delivery delays. But also in other key industries, where one might have thought that any trained worker was needed, there were substantial departures of personnel at the end of July and in August 1914, because the men had to join up. The largest ammunition factory in the Dual Monarchy, in Wöllersdorf near Wiener Neustadt, was a most eloquent testimony to this ill-conceived approach.498 The lost workers could only be replaced with difficulty. Then new buildings and extensions had to be hastily built before production could be begun in earnest. All in all, however, the armaments industry succeeded comparatively quickly in offsetting losses caused by the war, above all the major loss of guns and heavy military equipment in the Russian theatre of war. The initiation of a modernisation in weaponry was just as rapid ; the manufacture of new types of guns and their high-volume production was begun.499 As a result, it can be said that the low personnel strengths and weaknesses certainly played their part in the Austrian failures in both the Serbian and the Russian theatres of war, and that in the case of the failed offensives and retreats a tremendous amount was lost, but that ultimately the errors in leadership weighed much more heavily than the ab- sence of armaments, weapons or ammunition. Industry was of course not prepared for war, which is why its capacities were insuf- ficient. The production of weapons was concentrated primarily in the Škoda Works in Pilsen, the artillery arsenal in Vienna, the Austrian Arms Manufacturing Company in Steyr, die Manfred Weiß Works in Budapest-Csepel as well as the factories in Bra- tislava (Preßburg), Pest-Szentlörincz and several smaller locations. Ammunition was produced in Enzesfeld, Pilsen, Wöllersdorf and also in Hungary. After the war began, however, the War Ministry converted many factories to purely armaments industries : Böhler in Kapfenberg, Arthur Krupp in Berndorf, the Hirtenberg Cartridge Cases and Metalwork Factory and others. Ultimately, hundreds of businesses were incorporated into the weapons and ammunition production, and this does not even include the sup- pliers. Since many businesses belonged to corporations, the number of major army suppliers amounted initially only to a few dozen and reached seventy only in 1915. The firms listed among the army suppliers were obligated on the basis of the Law on War Contributions to work almost exclusively for the Imperial and Royal Army Adminis- tration and had to obtain special permission for any other delivery. This militarisation of the businesses very quickly had an impact. In August 1914 there were 2.5 million rifles in Austria-Hungary. The annual pro- duction of almost 150,000 could by no means offset the first losses, as a result of which a severe shortage emerged.500 But then there was a surge in production, which reached more than 60,000 rifles a month by the beginning of 1915. The reason for this could be found for one thing in that the factories for this existed and that they produced in
zurück zum  Buch THE FIRST WORLD WAR - and the End of the Habsburg Monarchy, 1914 – 1918"
THE FIRST WORLD WAR and the End of the Habsburg Monarchy, 1914 – 1918
Entnommen aus der FWF-E-Book-Library