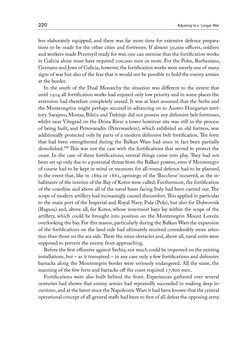 220 Adjusting to a Longer War less elaborately equipped, and there was far more time for extensive defence prepara- tions to be made for the other cities and fortresses. If almost 30,000 officers, soldiers and workers made Przemyśl ready for war, one can surmise that the fortification works in Galicia alone must have required 100,000 men or more. For the Poles, Ruthenians, Germans and Jews of Galicia, however, the fortification works were merely one of many signs of war but also of the fear that it would not be possible to hold the enemy armies at the border. In the south of the Dual Monarchy the situation was different to the extent that until 1914 all fortification works had enjoyed only low priority and in some places the extension had therefore completely ceased. It was at least assumed that the Serbs and the Montenegrins might perhaps succeed in advancing on to Austro-Hungarian terri- tory. Sarajevo, Mostar, Bileća and Trebinje did not possess any defensive belt fortresses, whilst near Višegrad on the Drina River a tower howitzer site was still in the process of being built, and Petrovaradin (Peterwardein), which exhibited an old fortress, was additionally protected only by parts of a modern defensive belt fortification. The forts that had been strengthened during the Balkan Wars had since in fact been partially demolished.530 This was not the case with the fortifications that served to protect the coast. In the case of these fortifications, several things came into play. They had not been set up only due to a potential threat from the Balkan powers, even if Montenegro of course had to be kept in mind or measures for all-round defence had to be planned, in the event that, like in 1869 or 1882, uprisings of the ‘Bocchese’ occurred, as the in- habitants of the interior of the Bay of Kotor were called. Furthermore, the fortification of the coastline and above all of the naval bases facing Italy had been carried out. The scope of modern artillery had increasingly caused discomfort. This applied in particular to the main port of the Imperial and Royal Navy, Pula (Pola), but also for Dubrovnik (Ragusa) and, above all, for Kotor, whose innermost bays lay within the scope of the artillery, which could be brought into position on the Montenegrin Mount Lovcén overlooking the bay. For this reason, particularly during the Balkan Wars the expansion of the fortifications on the land side had ultimately received considerably more atten- tion than those on the sea side. There the mine obstacles and, above all, naval units were supposed to prevent the enemy from approaching. Before the first offensive against Serbia, not much could be improved on the existing installations, but  – as it transpired  – in any case only a few fortifications and defensive barracks along the Montenegrin border were seriously endangered. All the same, the manning of the few forts and barracks off the coast required 17,800 men. Fortifications were also built behind the front. Experiences gathered over several centuries had shown that enemy armies had repeatedly succeeded in making deep in- cursions, and at the latest since the Napoleonic Wars it had been known that the central operational concept of all general staffs had been to first of all defeat the opposing army
zurück zum  Buch THE FIRST WORLD WAR - and the End of the Habsburg Monarchy, 1914 – 1918"
THE FIRST WORLD WAR and the End of the Habsburg Monarchy, 1914 – 1918
Entnommen aus der FWF-E-Book-Library