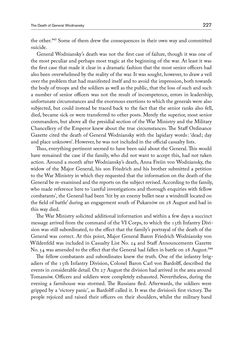 The﻿ Death﻿ of﻿ General﻿ Wodniansky 227 the other.543 Some of them drew the consequences in their own way and committed suicide. General Wodniansky’s death was not the first case of failure, though it was one of the most peculiar and perhaps most tragic at the beginning of the war. At least it was the first case that made it clear in a dramatic fashion that the most senior officers had also been overwhelmed by the reality of the war. It was sought, however, to draw a veil over the problem that had manifested itself and to avoid the impression, both towards the body of troops and the soldiers as well as the public, that the loss of such and such a number of senior officers was not the result of incompetence, errors in leadership, unfortunate circumstances and the enormous exertions to which the generals were also subjected, but could instead be traced back to the fact that the senior ranks also fell, died, became sick or were transferred to other posts. Merely the superior, most senior commanders, but above all the presidial section of the War Ministry and the Military Chancellery of the Emperor knew about the true circumstances. The Staff Ordinance Gazette cited the death of General Wodniansky with the lapidary words : ‘dead ; day and place unknown’. However, he was not included in the official casualty lists. Thus, everything pertinent seemed to have been said about the General. This would have remained the case if the family, who did not want to accept this, had not taken action. Around a month after Wodniansky’s death, Anna Freiin von Wodniansky, the widow of the Major General, his son Friedrich and his brother submitted a petition to the War Ministry in which they requested that the information on the death of the General be re-examined and the reports on the subject revised. According to the family, who made reference here to ‘careful investigations and thorough enquiries with fellow combatants’, the General had been ‘hit by an enemy bullet near a windmill located on the field of battle’ during an engagement south of Pukarzów on 28 August and had in this way died. The War Ministry solicited additional information and within a few days a succinct message arrived from the command of the VI Corps, to which the 15th Infantry Divi- sion was still subordinated, to the effect that the family’s portrayal of the death of the General was correct. At this point, Major General Baron Friedrich Wodniansky von Wildenfeld was included in Casualty List No. 24 and Staff Announcements Gazette No. 54 was amended to the effect that the General had fallen in battle on 28 August.544 The fellow combatants and subordinates knew the truth. One of the infantry brig- adiers of the 15th Infantry Division, Colonel Baron Carl von Bardolff, described the events in considerable detail. On 27 August the division had arrived in the area around Tomazsów. Officers and soldiers were completely exhausted. Nevertheless, during the evening a farmhouse was stormed. The Russians fled. Afterwards, the soldiers were gripped by a ‘victory panic’, as Bardolff called it. It was the division’s first victory. The people rejoiced and raised their officers on their shoulders, whilst the military band
zurück zum  Buch THE FIRST WORLD WAR - and the End of the Habsburg Monarchy, 1914 – 1918"
THE FIRST WORLD WAR and the End of the Habsburg Monarchy, 1914 – 1918
Entnommen aus der FWF-E-Book-Library