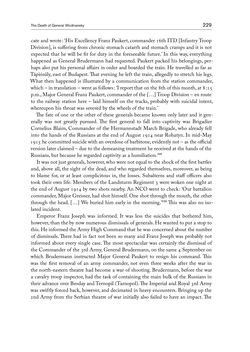 The﻿ Death﻿ of﻿ General﻿ Wodniansky 229 cate and wrote : ‘His Excellency Franz Paukert, commander 16th ITD [Infantry Troop Division], is suffering from chronic stomach catarrh and stomach cramps and it is not expected that he will be fit for duty in the foreseeable future.’ In this way, everything happened as General Brudermann had requested. Paukert packed his belongings, per- haps also put his personal affairs in order and boarded the train. He travelled as far as Tápiósüly, east of Budapest. That evening he left the train, allegedly to stretch his legs. What then happened is illustrated by a communication from the station commander, which  – in translation  – went as follows : ‘I report that on the 8th of this month, at 8 :15 p.m., Major General Franz Paukert, commander of the […] Troop Division  – en route to the railway station here  – laid himself on the tracks, probably with suicidal intent, whereupon his throat was severed by the wheels of the train.’ The fate of one or the other of these generals became known only later and it gen- erally was not greatly pursued. The first general to fall into captivity was Brigadier Cornelius Blaim, Commander of the Hermannstadt March Brigade, who already fell into the hands of the Russians at the end of August 1914 near Rohatyn. In mid-May 1915 he committed suicide with an overdose of barbitone, evidently not  – as the official version later claimed  – due to the demeaning treatment he received at the hands of the Russians, but because he regarded captivity as a humiliation.549 It was not just generals, however, who were not equal to the shock of the first battles and, above all, the sight of the dead, and who regarded themselves, moreover, as being to blame for, or at least complicitous in, the losses. Subalterns and staff officers also took their own life. Members of the Landsturm Regiment 3 were woken one night at the end of August 1914 by two shots nearby. An NCO went to check : ‘Our battalion commander, Major Greisser, had shot himself. One shot through the mouth, the other through the head. […] We buried him early in the morning.’550 This was also no iso- lated incident. Emperor Franz Joseph was informed. It was less the suicides that bothered him, however, than the by now numerous dismissals of generals. He wanted to put a stop to this. He informed the Army High Command that he was concerned about the number of dismissals. There had in fact not been so many and Franz Joseph was probably not informed about every single case. The most spectacular was certainly the dismissal of the Commander of the 3rd Army, General Brudermann, on the same 4 September on which Brudermann instructed Major General Paukert to resign his command. This was the first removal of an army commander, not even three weeks after the war in the north-eastern theatre had become a war of shooting. Brudermann, before the war a cavalry troop inspector, had the task of containing the main bulk of the Russians in their advance over Broday and Ternopil (Tarnopol). The Imperial and Royal 3rd Army was swiftly forced back, however, and decimated in heavy encounters. Bringing up the 2nd Army from the Serbian theatre of war initially also failed to have an impact. The
zurück zum  Buch THE FIRST WORLD WAR - and the End of the Habsburg Monarchy, 1914 – 1918"
THE FIRST WORLD WAR and the End of the Habsburg Monarchy, 1914 – 1918
Entnommen aus der FWF-E-Book-Library