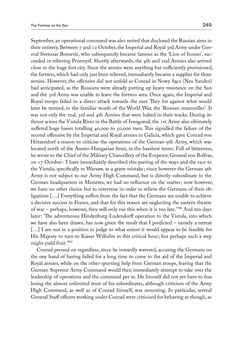 The﻿ Fortress﻿ on﻿ the﻿ San 249 September, an operational command was also netted that disclosed the Russian aims in their entirety. Between 7 and 12 October, the Imperial and Royal 3rd Army under Gen- eral Svetozar Boroević, who subsequently became famous as the ‘Lion of Isonzo’, suc- ceeded in relieving Przemyśl. Shortly afterwards, the 4th and 2nd Armies also arrived close to the huge fort city. Since the armies were anything but sufficiently provisioned, the fortress, which had only just been relieved, immediately became a supplier for three armies. However, the offensive did not unfold as Conrad in Nowy Sącz (Neu Sandez) had anticipated, as the Russians were already putting up heavy resistance on the San and the 3rd Army was unable to leave the fortress area. Once again, the Imperial and Royal troops failed in a direct attack towards the east. They hit against what would later be termed, in the familiar words of the World War, the ‘Russian steamroller’. It was not only the 2nd, 3rd and 4th Armies that were halted in their tracks. During its thrust across the Vistula River in the Battle of Ivangorod, the 1st Army also ultimately suffered huge losses totalling 40,000 to 50,000 men. This signalled the failure of the second offensive by the Imperial and Royal armies in Galicia, which gave Conrad von Hötzendorf a reason to criticise the operations of the German 9th Army, which was located north of the Austro-Hungarian front, in the harshest terms. Full of bitterness, he wrote to the Chief of the Military Chancellery of the Emperor, General von Bolfras, on 17 October : ‘I have immediately described this parting of the ways and the race to the Vistula, specifically to Warsaw, as a grave mistake ; since however the German 9th Army is not subject to our Army High Command, but is directly subordinate to the German headquarters in Mezières, we had no influence on the matter ; now however, we have no other choice but to intervene in order to relieve the Germans of their ob- ligations […] Everything suffers from the fact that the Germans are unable to achieve a decisive success in France, and that for this reason are neglecting the eastern theatre of war  – perhaps, however, they will only rue this when it is too late.’596 And ten days later : ‘The adventurous Hindenburg-Ludendorff operation to the Vistula, into which we have also been drawn, has now given the result that I predicted  – namely a retreat […] I am not in a position to judge to what extent it would appear to be feasible for His Majesty to turn to Kaiser Wilhelm in this critical hour ; but perhaps such a step might yield fruit.’597 Conrad pressed on regardless, since he inwardly wavered, accusing the Germans on the one hand of having failed for a long time to come to the aid of the Imperial and Royal armies, while on the other spurning help from German troops, fearing that the German Supreme Army Command would then immediately attempt to take over the leadership of operations and the command per se. He himself did not yet have to fear losing the almost unlimited trust of his subordinates, although criticism of the Army High Command, as well as of Conrad himself, was mounting. In particular, several General Staff officers working under Conrad were criticised for behaving as though, as
zurück zum  Buch THE FIRST WORLD WAR - and the End of the Habsburg Monarchy, 1914 – 1918"
THE FIRST WORLD WAR and the End of the Habsburg Monarchy, 1914 – 1918
Entnommen aus der FWF-E-Book-Library