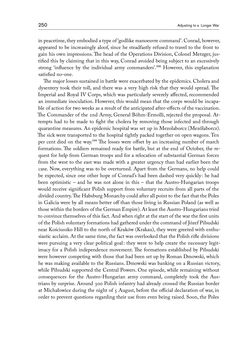 250 Adjusting to a Longer War in peacetime, they embodied a type of ‘godlike manoeuvre command’. Conrad, however, appeared to be increasingly aloof, since he steadfastly refused to travel to the front to gain his own impressions. The head of the Operations Division, Colonel Metzger, jus- tified this by claiming that in this way, Conrad avoided being subject to an excessively strong ‘influence by the individual army commanders’.598 However, this explanation satisfied no-one. The major losses sustained in battle were exacerbated by the epidemics. Cholera and dysentery took their toll, and there was a very high risk that they would spread. The Imperial and Royal IV Corps, which was particularly severely affected, recommended an immediate inoculation. However, this would mean that the corps would be incapa- ble of action for two weeks as a result of the anticipated after-effects of the vaccination. The Commander of the 2nd Army, General Böhm-Ermolli, rejected the proposal. At- tempts had to be made to fight the cholera by removing those infected and through quarantine measures. An epidemic hospital was set up in Mezolaborcz (Mezőlaborcz). The sick were transported to the hospital tightly packed together on open wagons. Ten per cent died on the way.599 The losses were offset by an increasing number of march formations. The soldiers remained ready for battle, but at the end of October, the re- quest for help from German troops and for a relocation of substantial German forces from the west to the east was made with a greater urgency than had earlier been the case. Now, everything was to be overturned. Apart from the Germans, no help could be expected, since one other hope of Conrad’s had been dashed very quickly : he had been optimistic  – and he was not alone in this  – that the Austro-Hungarian troops would receive significant Polish support from voluntary recruits from all parts of the divided country. The Habsburg Monarchy could after all point to the fact that the Poles in Galicia were by all means better off than those living in Russian Poland (as well as those within the borders of the German Empire). At least the Austro-Hungarians tried to convince themselves of this fact. And when right at the start of the war the first units of the Polish voluntary formations had gathered under the command of Józef Piłsudski near Kościuszko Hill to the north of Kraków (Krakau), they were greeted with enthu- siastic acclaim. At the same time, the fact was overlooked that the Polish rifle divisions were pursuing a very clear political goal : they were to help create the necessary legit- imacy for a Polish independence movement. The formations established by Piłsudski were however competing with those that had been set up by Roman Dmowski, which he was making available to the Russians. Dmowski was banking on a Russian victory, while Piłsudski supported the Central Powers. One episode, while remaining without consequences for the Austro-Hungarian army command, completely took the Aus- trians by surprise. Around 300 Polish infantry had already crossed the Russian border at Michałowice during the night of 5 August, before the official declaration of war, in order to prevent questions regarding their use from even being raised. Soon, the Poles
zurück zum  Buch THE FIRST WORLD WAR - and the End of the Habsburg Monarchy, 1914 – 1918"
THE FIRST WORLD WAR and the End of the Habsburg Monarchy, 1914 – 1918
Entnommen aus der FWF-E-Book-Library