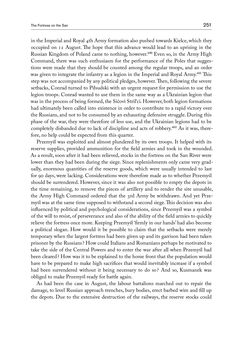 The﻿ Fortress﻿ on﻿ the﻿ San 251 in the Imperial and Royal 4th Army formation also pushed towards Kielce, which they occupied on 12 August. The hope that this advance would lead to an uprising in the Russian Kingdom of Poland came to nothing, however.600 Even so, in the Army High Command, there was such enthusiasm for the performance of the Poles that sugges- tions were made that they should be counted among the regular troops, and an order was given to integrate the infantry as a legion in the Imperial and Royal Army.601 This step was not accompanied by any political pledges, however. Then, following the severe setbacks, Conrad turned to Piłsudski with an urgent request for permission to use the legion troops. Conrad wanted to use them in the same way as a Ukrainian legion that was in the process of being formed, the Sičovi Stril‘ci. However, both legion formations had ultimately been called into existence in order to contribute to a rapid victory over the Russians, and not to be consumed by an exhausting defensive struggle. During this phase of the war, they were therefore of less use, and the Ukrainian legions had to be completely disbanded due to lack of discipline and acts of robbery.602 As it was, there- fore, no help could be expected from this quarter. Przemyśl was exploited and almost plundered by its own troops. It helped with its reserve supplies, provided ammunition for the field armies and took in the wounded. As a result, soon after it had been relieved, stocks in the fortress on the San River were lower than they had been during the siege. Since replenishments only came very grad- ually, enormous quantities of the reserve goods, which were usually intended to last for 90 days, were lacking. Considerations were therefore made as to whether Przemyśl should be surrendered. However, since it was also not possible to empty the depots in the time remaining, to remove the pieces of artillery and to render the site unusable, the Army High Command ordered that the 3rd Army be withdrawn. And yet Prze- myśl was at the same time supposed to withstand a second siege. This decision was also influenced by political and psychological considerations, since Przemyśl was a symbol of the will to resist, of perseverance and also of the ability of the field armies to quickly relieve the fortress once more. Keeping Przemyśl ‘firmly in our hands’ had also become a political slogan. How would it be possible to claim that the setbacks were merely temporary when the largest fortress had been given up and its garrison had been taken prisoner by the Russians ? How could Italians and Romanians perhaps be motivated to take the side of the Central Powers and to enter the war after all when Przemyśl had been cleared ? How was it to be explained to the home front that the population would have to be prepared to make high sacrifices that would inevitably increase if a symbol had been surrendered without it being necessary to do so ? And so, Kusmanek was obliged to make Przemyśl ready for battle again. As had been the case in August, the labour battalions marched out to repair the damage, to level Russian approach trenches, bury bodies, erect barbed wire and fill up the depots. Due to the extensive destruction of the railways, the reserve stocks could
zurück zum  Buch THE FIRST WORLD WAR - and the End of the Habsburg Monarchy, 1914 – 1918"
THE FIRST WORLD WAR and the End of the Habsburg Monarchy, 1914 – 1918
Entnommen aus der FWF-E-Book-Library