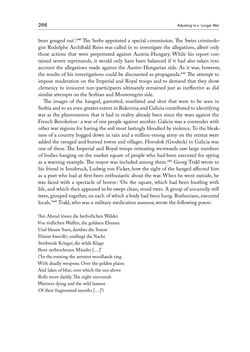 266 Adjusting to a Longer War been gouged out’.640 The Serbs appointed a special commission. The Swiss criminolo- gist Rodolphe Archibald Reiss was called in to investigate the allegations, albeit only those actions that were perpetrated against Austria-Hungary. While his report con- tained severe reprimands, it would only have been balanced if it had also taken into account the allegations made against the Austro-Hungarian side. As it was, however, the results of his investigations could be discounted as propaganda.641 The attempt to impose moderation on the Imperial and Royal troops and to demand that they show clemency to innocent non-participants ultimately remained just as ineffective as did similar attempts on the Serbian and Montenegrin side. The images of the hanged, garrotted, mutilated and shot that were to be seen in Serbia and to an even greater extent in Bukovina and Galicia contributed to identifying war as the phenomenon that it had in reality already been since the wars against the French Revolution : a war of one people against another. Galicia was a contender with other war regions for having the soil most lastingly bloodied by violence. To the bleak- ness of a country bogged down in rain and a million-strong army on the retreat were added the ravaged and burned towns and villages. Horodok (Grodeck) in Galicia was one of these. The Imperial and Royal troops retreating westwards saw large numbers of bodies hanging on the market square of people who had been executed for spying as a warning example. The mayor was included among them.642 Georg Trakl wrote to his friend in Innsbruck, Ludwig von Ficker, how the sight of the hanged affected him as a poet who had at first been enthusiastic about the war. When he went outside, he was faced with a spectacle of horror : ‘On the square, which had been bustling with life, and which then appeared to be swept clean, stood trees. A group of uncannily still trees, grouped together, on each of which a body had been hung. Ruthenians, executed locals.’643 Trakl, who was a military medication assessor, wrote the following poem : ‘Am Abend tönen die herbstlichen Wälder Von tödlichen Waffen, die goldnen Ebenen Und blauen Seen, darüber die Sonne Düster hinrollt ; umfängt die Nacht Sterbende Krieger, die wilde Klage Ihrer zerbrochenen Münder […]’ (‘In the evening the autumn woodlands ring With deadly weapons. Over the golden plains And lakes of blue, over which the sun above Rolls more darkly. The night surrounds Warriors dying and the wild lament Of their fragmented mouths […]’)
zurück zum  Buch THE FIRST WORLD WAR - and the End of the Habsburg Monarchy, 1914 – 1918"
THE FIRST WORLD WAR and the End of the Habsburg Monarchy, 1914 – 1918
Entnommen aus der FWF-E-Book-Library