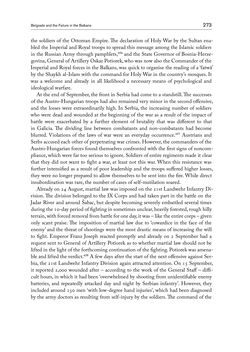 Belgrade﻿ and﻿ the﻿ Failure﻿ in﻿ the﻿ Balkans 273 the soldiers of the Ottoman Empire. The declaration of Holy War by the Sultan ena- bled the Imperial and Royal troops to spread this message among the Islamic soldiers in the Russian Army through pamphlets,656 and the State Governor of Bosnia-Herze- govina, General of Artillery Oskar Potiorek, who was now also the Commander of the Imperial and Royal forces in the Balkans, was quick to organise the reading of a ‘fatwā’ by the Shaykh al-Islam with the command for Holy War in the country’s mosques. It was a welcome and already in all likelihood a necessary means of psychological and ideological warfare. At the end of September, the front in Serbia had come to a standstill. The successes of the Austro-Hungarian troops had also remained very minor in the second offensive, and the losses were extraordinarily high. In Serbia, the increasing number of soldiers who were dead and wounded at the beginning of the war as a result of the impact of battle were exacerbated by a further element of brutality that was different to that in Galicia. The dividing line between combatants and non-combatants had become blurred. Violations of the laws of war were an everyday occurrence.657 Austrians and Serbs accused each other of perpetrating war crimes. However, the commanders of the Austro-Hungarian forces found themselves confronted with the first signs of noncom- pliance, which were far too serious to ignore. Soldiers of entire regiments made it clear that they did not want to fight a war, at least not this war. When this resistance was further intensified as a result of poor leadership and the troops suffered higher losses, they were no longer prepared to allow themselves to be sent into the fire. While direct insubordination was rare, the number of cases of self-mutilation soared. Already on 24 August, martial law was imposed on the 21st Landwehr Infantry Di- vision. The division belonged to the IX Corps and had taken part in the battle on the Jadar River and around Šabac, but despite becoming severely embattled several times during the 10-day period of fighting in sometimes unclear, heavily forested, rough hilly terrain, with forced removal from battle for one day, it was  – like the entire corps  – given only scant praise. The imposition of martial law due to ‘cowardice in the face of the enemy’ and the threat of shootings were the most drastic means of increasing the will to fight. Emperor Franz Joseph reacted promptly and already on 2 September had a request sent to General of Artillery Potiorek as to whether martial law should not be lifted in the light of the forthcoming continuation of the fighting. Potiorek was amena- ble and lifted the verdict.658 A few days after the start of the next offensive against Ser- bia, the 21st Landwehr Infantry Division again attracted attention. On 15 September, it reported 2,000 wounded after  – according to the work of the General Staff  – diffi- cult hours, in which it had been ‘overwhelmed by shooting from unidentifiable enemy batteries, and repeatedly attacked day and night by Serbian infantry’. However, they included around 150 men ‘with low-degree hand injuries’, which had been diagnosed by the army doctors as resulting from self-injury by the soldiers. The command of the
zurück zum  Buch THE FIRST WORLD WAR - and the End of the Habsburg Monarchy, 1914 – 1918"
THE FIRST WORLD WAR and the End of the Habsburg Monarchy, 1914 – 1918
Entnommen aus der FWF-E-Book-Library