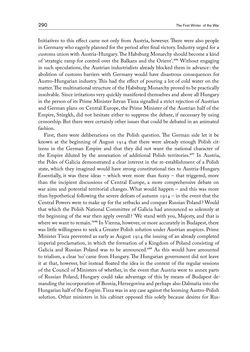 290 The First Winter of the War Initiatives to this effect came not only from Austria, however. There were also people in Germany who eagerly planned for the period after final victory. Industry urged for a customs union with Austria-Hungary. The Habsburg Monarchy should become a kind of ‘strategic ramp for control over the Balkans and the Orient’.696 Without engaging in such speculations, the Austrian industrialists already blocked them in advance : the abolition of customs barriers with Germany would have disastrous consequences for Austro-Hungarian industry. This had the effect of pouring a lot of cold water on the matter. The multinational structure of the Habsburg Monarchy proved to be practically insolvable. Since irritations very quickly manifested themselves and above all Hungary in the person of its Prime Minister Istvan Tisza signalled a strict rejection of Austrian and German plans on Central Europe, the Prime Minister of the Austrian half of the Empire, Stürgkh, did not hesitate either to suppress the debate, if necessary by using censorship. But there were certainly other issues that could be debated in an animated fashion. First, there were deliberations on the Polish question. The German side let it be known at the beginning of August 1914 that there were already enough Polish cit- izens in the German Empire and that they did not want the national character of the Empire diluted by the annexation of additional Polish territories.697 In Austria, the Poles of Galicia demonstrated a clear interest in the re-establishment of a Polish state, which they imagined would have strong constitutional ties to Austria-Hungary. Essentially, it was these ideas  – which were more than fuzzy  – that triggered, more than the incipient discussions of Central Europe, a more comprehensive debate on war aims and potential territorial changes. What would happen  – and this was more than hypothetical following the severe defeats of autumn 1914  – in the event that the Central Powers were to make up for the setbacks and conquer Russian Poland ? Would that which the Polish National Committee of Galicia had announced so solemnly at the beginning of the war then apply overall ? ‘We stand with you, Majesty, and that is where we want to remain.’698 In Vienna, however, or more accurately in Budapest, there was little willingness to seek a Greater Polish solution under Austrian auspices. Prime Minister Tisza prevented as early as August 1914 the issuing of an already completed imperial proclamation, in which the formation of a Kingdom of Poland consisting of Galicia and Russian Poland was to be announced.699 As this would have amounted to trialism, a clear ‘no’ came from Hungary. The Hungarian government did not leave it at that, however, but instead floated the idea in the context of the regular sessions of the Council of Ministers of whether, in the event that Austria were to annex parts of Russian Poland, Hungary could take advantage of this by means of Budapest de- manding the incorporation of Bosnia, Herzegovina and perhaps also Dalmatia into the Hungarian half of the Empire. Tisza was in any case against the looming Austro-Polish solution. Other ministers in his cabinet opposed this solely because desires for Rus-
zurück zum  Buch THE FIRST WORLD WAR - and the End of the Habsburg Monarchy, 1914 – 1918"
THE FIRST WORLD WAR and the End of the Habsburg Monarchy, 1914 – 1918
Entnommen aus der FWF-E-Book-Library