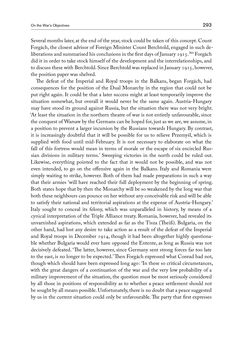 On﻿ the﻿ War’s﻿ Objectives 293 Several months later, at the end of the year, stock could be taken of this concept. Count Forgách, the closest advisor of Foreign Minister Count Berchtold, engaged in such de- liberations and summarised his conclusions in the first days of January 1915.703 Forgách did it in order to take stock himself of the development and the interrelationships, and to discuss these with Berchtold. Since Berchtold was replaced in January 1915, however, the position paper was shelved. The defeat of the Imperial and Royal troops in the Balkans, began Forgách, had consequences for the position of the Dual Monarchy in the region that could not be put right again. It could be that a later success might at least temporarily improve the situation somewhat, but overall it would never be the same again. Austria-Hungary may have stood its ground against Russia, but the situation there was not very bright. ‘At least the situation in the northern theatre of war is not entirely unfavourable, since the conquest of Warsaw by the Germans can be hoped for, just as we are, we assume, in a position to prevent a larger incursion by the Russians towards Hungary. By contrast, it is increasingly doubtful that it will be possible for us to relieve Przemyśl, which is supplied with food until mid-February. It is not necessary to elaborate on what the fall of this fortress would mean in terms of morale or the escape of six encircled Rus- sian divisions in military terms.’ Sweeping victories in the north could be ruled out. Likewise, everything pointed to the fact that it would not be possible, and was not even intended, to go on the offensive again in the Balkans. Italy and Romania were simply waiting to strike, however. Both of them had made preparations in such a way that their armies ‘will have reached their full deployment by the beginning of spring. Both states hope that by then the Monarchy will be so weakened by the long war that both these neighbours can pounce on her without any conceivable risk and will be able to satisfy their national and territorial aspirations at the expense of Austria-Hungary.’ Italy sought to conceal its felony, which was unparalleled in history, by means of a cynical interpretation of the Triple Alliance treaty. Romania, however, had revealed its unvarnished aspirations, which extended as far as the Tisza (Theiß). Bulgaria, on the other hand, had lost any desire to take action as a result of the defeat of the Imperial and Royal troops in December 1914, though it had been altogether highly questiona- ble whether Bulgaria would ever have opposed the Entente, as long as Russia was not decisively defeated. ‘The latter, however, since Germany sent strong forces far too late to the east, is no longer to be expected.’ Then Forgách expressed what Conrad had not, though which should have been expressed long ago : ‘In these so critical circumstances, with the great dangers of a continuation of the war and the very low probability of a military improvement of the situation, the question must be most seriously considered by all those in positions of responsibility as to whether a peace settlement should not be sought by all means possible. Unfortunately, there is no doubt that a peace suggested by us in the current situation could only be unfavourable. The party that first expresses
zurück zum  Buch THE FIRST WORLD WAR - and the End of the Habsburg Monarchy, 1914 – 1918"
THE FIRST WORLD WAR and the End of the Habsburg Monarchy, 1914 – 1918
Entnommen aus der FWF-E-Book-Library