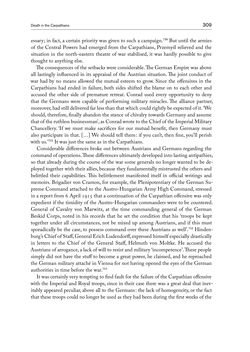 Death﻿ in﻿ the﻿ Carpathians 309 essary ; in fact, a certain priority was given to such a campaign.730 But until the armies of the Central Powers had emerged from the Carpathians, Przemyśl relieved and the situation in the north-eastern theatre of war stabilised, it was hardly possible to give thought to anything else. The consequences of the setbacks were considerable. The German Empire was above all lastingly influenced in its appraisal of the Austrian situation. The joint conduct of war had by no means allowed the mutual esteem to grow. Since the offensives in the Carpathians had ended in failure, both sides shifted the blame on to each other and accused the other side of premature retreat. Conrad used every opportunity to deny that the Germans were capable of performing military miracles. The alliance partner, moreover, had still delivered far less than that which could rightly be expected of it. ‘We should, therefore, finally abandon the stance of chivalry towards Germany and assume that of the ruthless businessman’, as Conrad wrote to the Chief of the Imperial Military Chancellery. ‘If we must make sacrifices for our mutual benefit, then Germany must also participate in that. […] We should tell them : if you can’t, then fine, you’ll perish with us.’731 It was just the same as in the Carpathians. Considerable differences broke out between Austrians and Germans regarding the command of operations. These differences ultimately developed into lasting antipathies, so that already during the course of the war some generals no longer wanted to be de- ployed together with their allies, because they fundamentally mistrusted the others and belittled their capabilities. This belittlement manifested itself in official writings and memoirs. Brigadier von Cramon, for example, the Plenipotentiary of the German Su- preme Command attached to the Austro-Hungarian Army High Command, stressed in a report from 6 April 1915 that a continuation of the Carpathian offensive was only expedient if the timidity of the Austro-Hungarian commanders were to be countered. General of Cavalry von Marwitz, at the time commanding general of the German Beskid Corps, noted in his records that he set the condition that his ‘troops be kept together under all circumstances, not be mixed up among Austrians, and if this must sporadically be the case, to possess command over these Austrians as well’.732 Hinden- burg’s Chief of Staff, General Erich Ludendorff, expressed himself especially drastically in letters to the Chief of the General Staff, Helmuth von Moltke. He accused the Austrians of arrogance, a lack of will to resist and military ‘incompetence’. These people simply did not have the stuff to become a great power, he claimed, and he reproached the German military attaché in Vienna for not having opened the eyes of the German authorities in time before the war.733 It was certainly very tempting to find fault for the failure of the Carpathian offensive with the Imperial and Royal troops, since in their case there was a great deal that inev- itably appeared peculiar, above all to the Germans : the lack of homogeneity, or the fact that these troops could no longer be used as they had been during the first weeks of the
zurück zum  Buch THE FIRST WORLD WAR - and the End of the Habsburg Monarchy, 1914 – 1918"
THE FIRST WORLD WAR and the End of the Habsburg Monarchy, 1914 – 1918
Entnommen aus der FWF-E-Book-Library