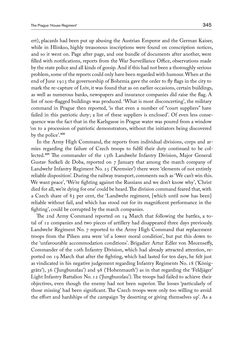 The﻿ Prague﻿ ‘House﻿ Regiment’ 345 ert), placards had been put up abusing the Austrian Emperor and the German Kaiser, while in Hlinkso, highly treasonous inscriptions were found on conscription notices, and so it went on. Page after page, and one bundle of documents after another, were filled with notifications, reports from the War Surveillance Office, observations made by the state police and all kinds of gossip. And if this had not been a thoroughly serious problem, some of the reports could only have been regarded with humour. When at the end of June 1915 the governorship of Bohemia gave the order to fly flags in the city to mark the re-capture of Lviv, it was found that as on earlier occasions, certain buildings, as well as numerous banks, newspapers and insurance companies did raise the flag. A list of non-flagged buildings was produced. ‘What is most disconcerting’, the military command in Prague then reported, ‘is that even a number of “court suppliers” have failed in this patriotic duty ; a list of these suppliers is enclosed’. Of even less conse- quence was the fact that in the Karlsgasse in Prague water was poured from a window ‘on to a procession of patriotic demonstrators, without the initiators being discovered by the police’.808 In the Army High Command, the reports from individual divisions, corps and ar- mies regarding the failure of Czech troops to fulfil their duty continued to be col- lected.809 The commander of the 13th Landwehr Infantry Division, Major General Gustav Székeli de Doba, reported on 7 January that among the march company of Landwehr Infantry Regiment No. 25 (‘Kremsier’) there were ‘elements of not entirely reliable disposition’. During the railway transport, comments such as ‘We can’t win this. We want peace’, ‘We’re fighting against the Russians and we don’t know why’, ‘Christ died for all, we’re dying for one’ could be heard. The division command feared that, with a Czech share of 83 per cent, the ‘Landwehr regiment, [which until now has been] reliable without fail, and which has stood out for its magnificent performance in the fighting’, could be corrupted by the march companies. The 2nd Army Command reported on 14 March that following the battles, a to- tal of 12 companies and two pieces of artillery had disappeared three days previously. Landwehr Regiment No. 7 reported to the Army High Command that replacement troops from the Pilsen area were ‘of a lower moral condition’, but put this down to the ‘unfavourable accommodation conditions’. Brigadier Artur Edler von Mecenseffy, Commander of the 10th Infantry Division, which had already attracted attention, re- ported on 19 March that after the fighting, which had lasted for ten days, he felt just as vindicated in his negative judgement regarding Infantry Regiments No. 18 (‘König- grätz’), 36 (‘Jungbunzlau’) and 98 (‘Hohenmauth’) as in that regarding the ‘Feldjäger’ Light Infantry Battalion No. 12 (‘Jungbunzlau’). The troops had failed to achieve their objectives, even though the enemy had not been superior. The losses ‘particularly of those missing’ had been significant. The Czech troops were only too willing to avoid the effort and hardships of the campaign ‘by deserting or giving themselves up’. As a
zurück zum  Buch THE FIRST WORLD WAR - and the End of the Habsburg Monarchy, 1914 – 1918"
THE FIRST WORLD WAR and the End of the Habsburg Monarchy, 1914 – 1918
Entnommen aus der FWF-E-Book-Library