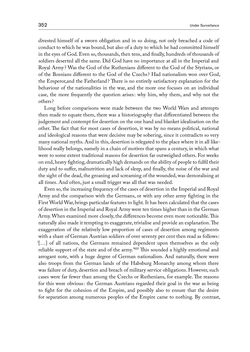 352 Under Surveillance divested himself of a sworn obligation and in so doing, not only breached a code of conduct to which he was bound, but also of a duty to which he had committed himself in the eyes of God. Even so, thousands, then tens, and finally, hundreds of thousands of soldiers deserted all the same. Did God have no importance at all in the Imperial and Royal Army ? Was the God of the Ruthenians different to the God of the Styrians, or of the Bosnians different to the God of the Czechs ? Had nationalism won over God, the Emperor,and the Fatherland ? There is no entirely satisfactory explanation for the behaviour of the nationalities in the war, and the more one focuses on an individual case, the more frequently the question arises : why him, why them, and why not the others ? Long before comparisons were made between the two World Wars and attempts then made to equate them, there was a historiography that differentiated between the judgement and contempt for desertion on the one hand and blanket idealisation on the other. The fact that for most cases of desertion, it was by no means political, national and ideological reasons that were decisive may be sobering, since it contradicts so very many national myths. And in this, desertion is relegated to the place where it in all like- lihood really belongs, namely in a chain of motives that spans a century, in which what were to some extent traditional reasons for desertion far outweighed others. For weeks on end, heavy fighting, dramatically high demands on the ability of people to fulfil their duty and to suffer, malnutrition and lack of sleep, and finally, the noise of the war and the sight of the dead, the groaning and screaming of the wounded, was demoralising at all times. And often, just a small trigger was all that was needed. Even so, the increasing frequency of the cases of desertion in the Imperial and Royal Army and the comparison with the Germans, or with any other army fighting in the First World War, brings particular features to light. It has been calculated that the cases of desertion in the Imperial and Royal Army were ten times higher than in the German Army. When examined more closely, the differences become even more noticeable. This naturally also made it tempting to exaggerate, trivialise and provide an explanation. The exaggeration of the relatively low proportion of cases of desertion among regiments with a share of German Austrian soldiers of over seventy per cent then read as follows : ‘[…] of all nations, the Germans remained dependent upon themselves as the only reliable support of the state and of the army.’825 This sounded a highly emotional and arrogant note, with a huge degree of German nationalism. And naturally, there were also troops from the German lands of the Habsburg Monarchy among whom there was failure of duty, desertion and breach of military service obligations. However, such cases were far fewer than among the Czechs or Ruthenians, for example. The reasons for this were obvious : the German Austrians regarded their goal in the war as being to fight for the cohesion of the Empire, and possibly also to ensure that the desire for separation among numerous peoples of the Empire came to nothing. By contrast,
zurück zum  Buch THE FIRST WORLD WAR - and the End of the Habsburg Monarchy, 1914 – 1918"
THE FIRST WORLD WAR and the End of the Habsburg Monarchy, 1914 – 1918
Entnommen aus der FWF-E-Book-Library