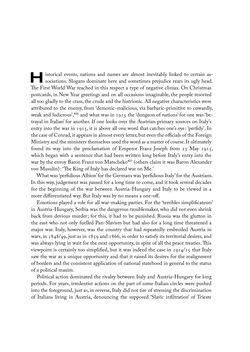 H istorical events, nations and names are almost inevitably linked to certain as-sociations. Slogans dominate here and sometimes prejudice rears its ugly head. The First World War reached in this respect a type of negative climax. On Christmas postcards, in New Year greetings and on all occasions imaginable, the people resorted all too gladly to the crass, the crude and the histrionic. All negative characteristics were attributed to the enemy, from ‘demonic-malicious, via barbaric-primitive to cowardly, weak and ludicrous’,826 and what was in 1915 the ‘dungeon of nations’ for one was ‘be- trayal in Italian’ for another. If one looks over the Austrian primary sources on Italy’s entry into the war in 1915, it is above all one word that catches one’s eye : ‘perfidy’. In the case of Conrad, it appears in almost every letter, but even the officials of the Foreign Ministry and the ministers themselves used the word as a matter of course. It ultimately found its way into the proclamation of Emperor Franz Joseph from 23 May 1915, which began with a sentence that had been written long before Italy’s entry into the war by the envoy Baron Franz von Matscheko827 (others claim it was Baron Alexander von Musulin) : ‘The King of Italy has declared war on Me.’ What was ‘perfidious Albion’ for the Germans was ‘perfidious Italy’ for the Austrians. In this way, judgement was passed for a long time to come, and it took several decades for the beginning of the war between Austria-Hungary and Italy to be viewed in a more differentiated way. But Italy was by no means a one-off. Emotions played a role for all war-making parties. For the ‘terribles simplificateurs’ in Austria-Hungary, Serbia was the dangerous troublemaker, who did not even shrink back from devious murder ; for this, it had to be punished. Russia was the glutton in the east who not only fuelled Pan-Slavism but had also for a long time threatened a major war. Italy, however, was the country that had repeatedly embroiled Austria in wars, in 1848/49, just as in 1859 and 1866, in order to satisfy its territorial desires, and was always lying in wait for the next opportunity, in spite of all the peace treaties. This viewpoint is certainly too simplified, but it was indeed the case in 1914/15 that Italy saw the war as a unique opportunity and that it raised its desires for the realignment of borders and the consistent application of national statehood in general to the status of a political maxim. Political action dominated the rivalry between Italy and Austria-Hungary for long periods. For years, irredentist actions on the part of some Italian circles were pushed into the foreground, just as, in reverse, Italy did not tire of stressing the discrimination of Italians living in Austria, denouncing the supposed ‘Slavic infiltration’ of Trieste
zurück zum  Buch THE FIRST WORLD WAR - and the End of the Habsburg Monarchy, 1914 – 1918"
THE FIRST WORLD WAR and the End of the Habsburg Monarchy, 1914 – 1918
Entnommen aus der FWF-E-Book-Library