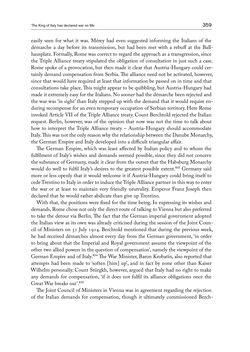 ‘The King of Italy has declared war on Me 359 easily seen for what it was. Mérey had even suggested informing the Italians of the démarche a day before its transmission, but had been met with a rebuff at the Ball- hausplatz. Formally, Rome was correct to regard the approach as a transgression, since the Triple Alliance treaty stipulated the obligation of consultation in just such a case. Rome spoke of a provocation, but then made it clear that Austria-Hungary could cer- tainly demand compensation from Serbia. The alliance need not be activated, however, since that would have required at least that information be passed on in time and that consultations take place. This might appear to be quibbling, but Austria-Hungary had made it extremely easy for the Italians. No sooner had the démarche been rejected and the war was ‘in sight’ than Italy stepped up with the demand that it would require en- during recompense for an even temporary occupation of Serbian territory. Here Rome invoked Article VII of the Triple Alliance treaty. Count Berchtold rejected the Italian request. Berlin, however, was of the opinion that now was not the time to talk about how to interpret the Triple Alliance treaty  – Austria-Hungary should accommodate Italy. This was not the only reason why the relationship between the Danube Monarchy, the German Empire and Italy developed into a difficult triangular affair. The German Empire, which was least affected by Italian policy and to whom the fulfilment of Italy’s wishes and demands seemed possible, since they did not concern the substance of Germany, made it clear from the outset that the Habsburg Monarchy would do well to fulfil Italy’s desires to the greatest possible extent.833 Germany said more or less openly that it would welcome it if Austria-Hungary could bring itself to cede Trentino to Italy in order to induce the Triple Alliance partner in this way to enter the war or at least to maintain very friendly neutrality. Emperor Franz Joseph then declared that he would rather abdicate than give up Trentino. With that, the positions were fixed for the time being. In expressing its wishes and demands, Rome chose not only the direct route of talking to Vienna but also preferred to take the detour via Berlin. The fact that the German imperial government adopted the Italian view as its own was already criticised during the session of the Joint Coun- cil of Ministers on 31 July 1914. Berchtold mentioned that during the previous week, he had received démarches almost every day from the German government, ‘in order to bring about that the Imperial and Royal government assume the viewpoint of the other two allied powers in the question of compensation’, namely the viewpoint of the German Empire and of Italy.834 The War Minister, Baron Krobatin, also reported that attempts had been made to ‘soften [him] up’, and in fact by none other than Kaiser Wilhelm personally. Count Stürgkh, however, argued that Italy had no right to make any demands for compensation, ‘if it does not fulfil its alliance obligations once the Great War breaks out’.835 The Joint Council of Ministers in Vienna was in agreement regarding the rejection of the Italian demands for compensation, though it ultimately commissioned Berch-
zurück zum  Buch THE FIRST WORLD WAR - and the End of the Habsburg Monarchy, 1914 – 1918"
THE FIRST WORLD WAR and the End of the Habsburg Monarchy, 1914 – 1918
Entnommen aus der FWF-E-Book-Library