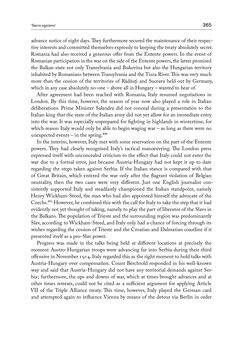 ‘Sacro﻿ egoismo’ 365 advance notice of eight days. They furthermore secured the maintenance of their respec- tive interests and committed themselves expressly to keeping the treaty absolutely secret. Romania had also received a generous offer from the Entente powers. In the event of Romanian participation in the war on the side of the Entente powers, the latter promised the Balkan state not only Transylvania and Bukovina but also the Hungarian territory inhabited by Romanians between Transylvania and the Tisza River. This was very much more than the cession of the territories of Rădăuţi and Suceava held out by Germany, which in any case absolutely no-one  – above all in Hungary  – wanted to hear of. After agreement had been reached with Romania, Italy resumed negotiations in London. By this time, however, the season of year now also played a role in Italian deliberations. Prime Minister Salandra did not conceal during a presentation to the Italian king that the state of the Italian army did not yet allow for an immediate entry into the war. It was especially unprepared for fighting in highlands in wintertime, for which reason Italy would only be able to begin waging war  – as long as there were no unexpected events  – in the spring.850 In the interim, however, Italy met with some reservation on the part of the Entente powers. They had clearly recognised Italy’s tactical manoeuvring. The London press expressed itself with unconcealed criticism to the effect that Italy could not enter the war due to a formal error, just because Austria-Hungary had not kept it up to date regarding the steps taken against Serbia. If the Italian stance is compared with that of Great Britain, which entered the war only after the flagrant violation of Belgian neutrality, then the two cases were very different. Just one English journalist con- sistently supported Italy and steadfastly championed the Italian standpoint, namely Henry Wickham-Steed, the man who had also appointed himself the advocate of the Czechs.851 However, he combined this with the call for Italy to take the step that it had evidently not yet thought of taking, namely to play the part of liberator of the Slavs in the Balkans. The population of Trieste and the surrounding region was predominantly Slav, according to Wickham-Steed, and Italy only had a chance of forcing through its wishes regarding the cession of Trieste and the Croatian and Dalmatian coastline if it presented itself as a pro-Slav power. Progress was made in the talks being held at different locations at precisely the moment Austro-Hungarian troops were advancing far into Serbia during their third offensive in November 1914. Italy regarded this as the right moment to hold talks with Austria-Hungary over compensation. Count Berchtold responded in his well-known way and said that Austria-Hungary did not have any territorial demands against Ser- bia ; furthermore, the ups and downs of war, which at times brought advances and at other times retreats, could not be cited as a sufficient argument for applying Article VII of the Triple Alliance treaty. This time, however, Italy played the German card and attempted again to influence Vienna by means of the detour via Berlin in order
zurück zum  Buch THE FIRST WORLD WAR - and the End of the Habsburg Monarchy, 1914 – 1918"
THE FIRST WORLD WAR and the End of the Habsburg Monarchy, 1914 – 1918
Entnommen aus der FWF-E-Book-Library