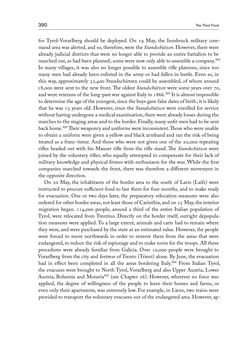 390 The Third Front for Tyrol-Vorarlberg should be deployed. On 19 May, the Innsbruck military com- mand area was alerted, and so, therefore, were the Standschützen. However, there were already judicial districts that were no longer able to provide an entire battalion to be marched out, as had been planned ; some were now only able to assemble a company.923 In many villages, it was also no longer possible to assemble rifle platoons, since too many men had already been enlisted in the army or had fallen in battle. Even so, in this way, approximately 32,400 Standschützen could be assembled, of whom around 18,000 were sent to the new front. The oldest Standschützen were some years over 70, and were veterans of the long-past war against Italy in 1866.924 It is almost impossible to determine the age of the youngest, since the boys gave false dates of birth ; it is likely that he was 13 years old. However, since the Standschützen were enrolled for service without having undergone a medical examination, there were already losses during the marches to the staging areas and to the border. Finally, many unfit men had to be sent back home.925 Their weaponry and uniforms were inconsistent. Those who were unable to obtain a uniform were given a yellow and black armband and ran the risk of being treated as a franc-tireur. And those who were not given one of the 20,000 repeating rifles headed out with his Mauser rifle from the rifle stand. The Standschützen were joined by the voluntary rifles, who equally attempted to compensate for their lack of military knowledge and physical fitness with enthusiasm for the war. While the first companies marched towards the front, there was therefore a different movement in the opposite direction. On 20 May, the inhabitants of the border area to the south of Lavis (Laifs) were instructed to procure sufficient food to last them for four months, and to make ready for evacuation. One or two days later, the preparatory relocation measures were also ordered for other border areas, not least those of Carinthia, and on 25 May, the interior migration began. 114,000 people, around a third of the entire Italian population of Tyrol, were relocated from Trentino. Directly on the border itself, outright depopula- tion measures were applied. To a large extent, animals and carts had to remain where they were, and were purchased by the state at an estimated value. However, the people were forced to move northwards in order to remove them from the areas that were endangered, to reduce the risk of espionage and to make room for the troops. All these procedures were already familiar from Galicia. Over 10,000 people were brought to Vorarlberg from the city and fortress of Trento (Trient) alone. By June, the evacuation had in effect been completed in all the areas bordering Italy.926 From Italian Tyrol, the evacuees were brought to North Tyrol, Vorarlberg and also Upper Austria, Lower Austria, Bohemia and Moravia927 (see Chapter 26). However, wherever no force was applied, the degree of willingness of the people to leave their homes and farms, or even only their apartments, was extremely low. For example, in Lienz, two trains were provided to transport the voluntary evacuees out of the endangered area. However, ap-
zurück zum  Buch THE FIRST WORLD WAR - and the End of the Habsburg Monarchy, 1914 – 1918"
THE FIRST WORLD WAR and the End of the Habsburg Monarchy, 1914 – 1918
Entnommen aus der FWF-E-Book-Library